McCann Turns The University of Melbourne Into A Free Exhibition 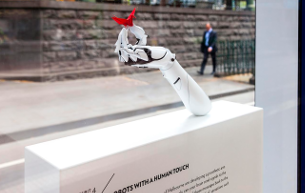 McCann Melbourne have launched ‘Made possible by Melbourne’ a free exhibition of world-changing research undertaken by the University.

Running through the month of November, the integrated campaign uses the existing advertising infrastructure in Melbourne’s CBD to host an interactive exhibition highlighting the contribution the research projects are making towards global welfare.

In partnership with Adshel, exhibits have been placed within the city’s free tram zone and can be found on the campaign website. The exhibition is accompanied by a digital audio guide, virtual map, free cycling tour and a pop-up cafeteria offering research you can eat.

Stories featured in the exhibition include research that will improve half the world’s diet, a way to turn any water into drinking water, the creation of robotic arms with a human touch, and breakthroughs in prenatal care that will save thousands of unborn lives - to name a few.

Executive Director of Marketing and Communications Lara McKay said: “This project is the result of a true collaboration between the University and McCann. Team members from the agency spent weeks on campus talking directly to researchers to understand their world-changing research. The creatives pushed the researchers to think about their work in a new way and in-turn the researchers have inspired the creatives to bring these projects to life in a way they we couldn’t have previously imagined. The result is something we believe Melbournians can be truly proud of.”

Executive Creative Director at McCann, Matt Lawson said “Production may disagree, but it was an absolute pleasure bringing this research to life and having the chance to work with, and celebrate, so many brilliant thinkers. There is a perception that the research coming out of the University of Melbourne is mostly theoretical, it was good to be able to prove that the opposite is true.”

The campaign is supported by static and digital out of home, tram and train media, digital and social media, PR and a takeover of City Square. The campaign’s media was also planned and bought by McCann’s integrated media team and the agency collaborated with Airbag for exhibit production.

“Made Possible By Melbourne” is the follow-up to the University’s successful “Where Great Minds Collide campaign” that won Marketing Program of the Year at the recent Australian Marketing Institute Awards.