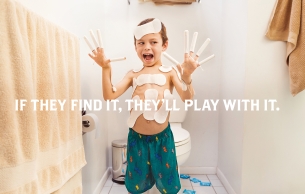 Evolve, the national organization focused on making gun safety and responsibility the social norm, follows up its viral video sensation ‘Playthings’ with a print series that further illustrates the importance of keeping guns locked up when ever-so-curious children are at home.

The charmingly provocative ads feature kids playing with all manner of taboo household items – condoms, mom’s lacey lingerie, maxi pads, sex toys and tampons – with the simple reminder: ‘If they find it, they’ll play with it.’  That’s an embarrassing prospect if kids find a lacey bra, but it’s a terrifying one if they find an unlocked gun. The new initiative also includes out of home, digital and social elements.

It’s the same insightful, non-political message that helped ‘Playthings’ become the most viewed gun safety PSA in history, reaching more than 7MM people.  The 30-second spot, also created by McCann Erickson, features a highly recognizable setting: two young boys on a play date, engaged in a sword fight, helmets and all.  But as the mothers exchange pleasantries, they soon realize the swords aren’t really swords; they’re vibrators the kids found in the house, and the speechless women are left watching the scene unfold in cringe-worthy silence.

But while the awkward humour has people taking notice of the campaign, it’s the good-sense approach to gun safety that’s really fueling the conversation, according to Evolve’s co-founder Rebecca Bond.

“Owning a firearm, and living with them in our communities, comes with the heavy responsibility of safety,” Bond says.  “Let’s face it, kids find everything.  Some things are simply embarrassing.  Some things are potentially lethal and there is absolutely no do-over.  Hoping that kids exercise good judgment – or are even capable of doing so – is not a bulletproof plan for any parent.

She added, ‘We have to keep finding more ways for everyone to take on these conversations; ensuring that no other lives are tragically impacted by lax and avoidable safety behaviors.  Wouldn’t that be amazing?”

Said Sean Bryan, McCann NY co-Chief Creative Officer: "PSA's around gun safety are, as a rule, scary and serious. So we decided to use comedy instead. And that relatable humour has really helped Evolve's common sense message break through."