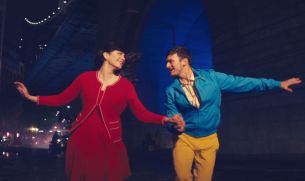 When Love at First Sight and Spy Missions Are Unlikely to Succeed, You Should “Go for the Win” with New York Lottery’s Take 5

In a quest to speak to all types of New Yorkers, the New York Lottery continues its Take 5 campaign launching two new spots from McCann—a full-blown musical, “Odds of Love,” and an epic spy caper, “Spy Mission.” Both spots flip popular entertainment genres on their head.

“Odds of Love” pulls inspiration from Broadway musicals to tell the story of a couple who fall in love at first sight, only to realize the odds of their relationship working out are not great. They decide to go their separate ways and play Take 5 instead, where they have much better odds.

“Spy Mission” subverts the archetypal espionage film to tell the surprisingly relatable story of a superspy whose mission is thwarted by her bumbling co-workers. As the stakes rise, it becomes apparent the team has a better chance of winning Take 5 than they do of accomplishing their mission.

Directed by Speck and Gordon, both spots pay tribute to the genres they parody by faithfully recreating them. A Broadway choreographer and musical theatre composer brought authenticity to “Odds of Love.” Meanwhile, Method Studios, the visual effects company behind the Avengers and Black Panther, was responsible for bringing the slick and stunning world of “Spy Mission” to life.

The campaign highlights Take 5’s winnability by reminding consumers that the odds of winning Take 5 are much more likely than the alternative. The campaign will run on OOH, digital, social, and radio channels with both :30 and :60 second spots.