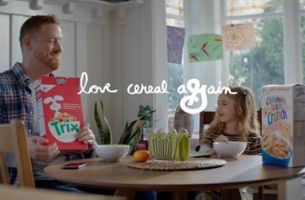 Anyone who has ever played ‘peek-a-boo’ or ‘aeroplane’ with a child knows that when kids love something, they want to experience it again, over and over...and over.

McCann New York have created ‘Again’, a new campaign for General Mills. Timed to an announcement that as of today 75 percent of their cereals no longer include artificial flavours and colours from artificial sources, the campaign taps into this universally shared observation to convey an important message, now parents can love General Mills cereals – again.