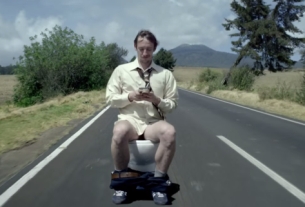 Texting while driving is a habit that is becoming more popular every day, and several campaigns to fight it have been created worldwide. While the majority of them addresses the driver´s consciousness, this McCann Mexico campaign created for Chevrolet tackles the opposite side of the equation: the person who is on the other side of the conversation, texting the driver.

The campaign consists of a film and three print ads all under the concept “When you text a driver, you become the hazard.” In the film, we see a man sitting on a toilet who is happily texting across the road, until he finally stops in a curve. We see the driver he is texting come at him head-on, who is obliviously looking at his mobile. He manages to brake and skid to avoid crashing into his friend who is sitting on the toilet.