McCann Melbourne also ranked in at #38 agency in the world 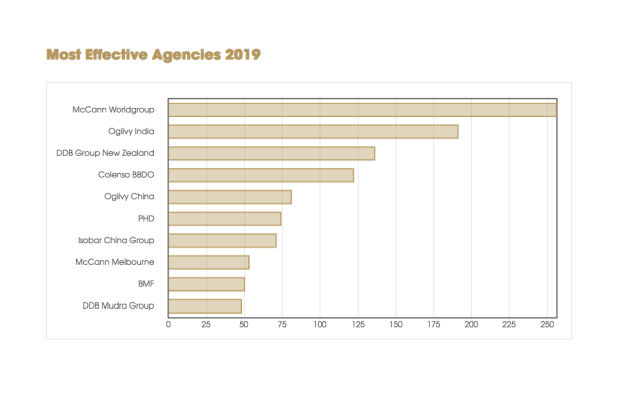 Australian agencies in the Asia Pacific agency rankings include BMF Sydney ranking in at #12, CHE Proximity and Clemenger BBDO, Melbourne both in at #14, The Monkeys at #17 and Ogilvy Sydney in at #20. 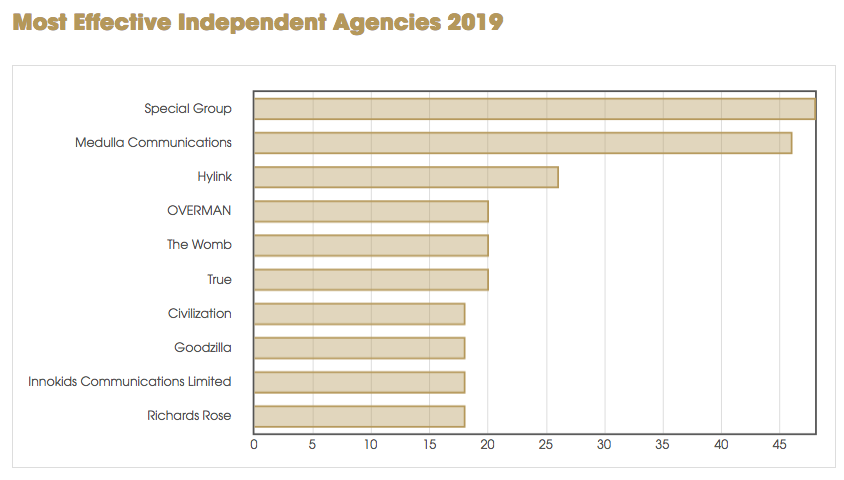 The Effie Index is the objective global marketing effectiveness ranking, compiled from the insights of experienced juries of industry peers throughout the world.

Says Traci Alford, CEO, Effie Worldwide: “Despite the pace and rate of change that we are experiencing as an industry, effectiveness remains at the heart of everyone’s business objectives. The marketers ranked in this year’s Effie Index have achieved great results against challenging business goals and continue to raise the global gold standard of marketing effectiveness. On behalf of Effie Worldwide, I offer my sincere congratulations to the top ranked teams around the world on this achievement.”

Unilever retained its title as the most effective marketer in 2019, the sixth time since 2011 that it has held the top spot.  Nestlé moved up one spot as the second most effective marketer (based on its success across more than two dozen markets). The Coca-Cola Company ranked third, followed by McDonald’s and Procter & Gamble respectively. PepsiCo dropped four spots to sixth, while global brewers AB InBev (#7) and Heineken (#9, tie), along with Mars (#8) and Yum! Brands (#9, tie) all land in the top 10.

Coca-Cola returned as the most effective brand in 2019, unseating Pepsi. This is the fifth time Coca-Cola has held the top spot since 2011. McDonald’s retained its second-place spot, with Vodafone jumping one spot to third. KFC took the fourth spot, its first appearance in the top five thanks to its success in the APAC region, followed by IKEA ranking fifth. Eighth-ranked Pepsi (last year’s most effective brand) along with Burger King, Chevrolet, Nescafé, MasterCard and Movistar landed in the top 10.

Sancho BBDO (Bogotá) held its title as the most effective individual agency office in 2019 behind its success for brands like Bancolombia, the Colombia Red Cross and Postobón, among other regional and global brands. Dubai-based FP7/DXB follows at number two, behind success for regional and global brands including Babyshop, Dubai Properties, OMO, Puck and Uber. McCann Worldgroup’s New Delhi office entered into the top five, ranking third. Ogilvy (Mumbai) jumped one spot to fourth, followed by DDB Group New Zealand – also its first debut into the top 5. The top 20 effective agency offices continue to feature a globally diverse mix of agencies, including those from Brazil, China, Colombia, Egypt, India, Israel, New Zealand, Peru, Russia, Turkey, UAE, and the United States.

German agency Jung von Matt is the top-ranked independent agency in 2019 for the first time, followed by Interaction (San José, Costa Rica) at number two and Special Group (Auckland) in third. Mumbai-based Medulla Communications and Rafineri (Istanbul) round out the top five.

This year’s Index rankings were determined by the cumulative success of 46 national, regional and multi-national Effie Awards competitions from 2018, encompassing 3,753 worldwide Effie winners and finalists announced between January 1, 2018 and December 31, 2018.

Every brand and company featured in the Effie Index has undergone rigorous evaluations of their case studies by expert industry judges, who examine and debate each case’s strategic communications challenges and objectives, the idea, how the idea was brought to life through creative, and what makes an Effie an Effie: strong results.

Click here to view the Most Effective Agencies 2019 rankings in APAC.

Click here to view the Most Effective Independent Agency rankings for APAC.