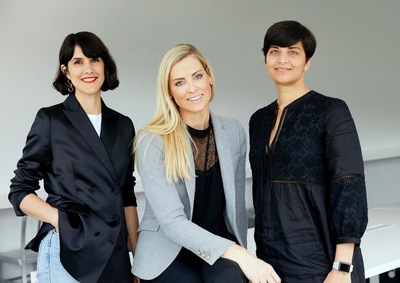 Says Ben Lilley, CEO, McCann: "We are excited to announce this brilliant leadership line-up for our Melbourne office. Anita, Roshni and Nicole have proven themselves stars at McCann and I couldn't be more pleased to have them now leading our outstanding Melbourne team."

Deutsch-Burley has been with McCann since 2015, joining from George Patterson Y&R. In her time with the agency, McCann Melbourne has continued to build on its creative and effectiveness success that begun with Baron and (now) McCann global ECD John Mescall's global phenomenon Dumb Ways to Die for Metro Trains in 2012. Hegerman joined McCann Sydney in 2014 from her role as planning director at BBDO India and has helped lead the streategic and creative reinvigoration of McCann Sydney, including numerous Effie awards and the agency's standout Cannes Lions success this year. Mandile joined the agency at the start of the year and was previously creative group head at Clemenger BBDO.

Says Baron: "Nicole, Anita and Roshni are a joy to work with. They've already achieved great things at McCann and with them at the helm in Melbourne we're looking forward to even bigger things to come. Our Melbourne office is one of the McCann network's global centres of excellence and Melbourne is also a key contributor to McCann's regional APAC creativity, with Ben Lilley running his dual role as Asia Pacific Creative Leadership Chair from Melbourne since 2016. So I'm especially pleased to have a talent of Nicole's calibre leading our local team."

Says Deutsch-Burley: "I'm immensely proud of the work and results our Melbourne team have produced for our clients in the years that I've been here. And I'm excited for the opportunity to continue to build on that work together. I feel very fortunate to be partnering with such impressive client partners and I couldn't have hoped for a more capable and collaborative senior leadership team. Our creative recognition over the past years speaks for itself, but McCann Melbourne's ongoing effectiveness recognition also speaks for the outstanding results that our creativity is delivering for our clients. That remains a firm focus for us."

McCann Melbourne has steadily built its creative reputation since Lilley, Mescall and Ashley Farr (now global head of strategy and research for Commonwealth//McCann based in Detroit) sold and merged their business SMART into the agency in 2011. They were joined by Baron in 2012, whose work with Mescall saw the agency named most awarded in the world in 2013. McCann Melbourne is now among only a handful of Australian agencies to have collected Lions every year since for its work on clients including The Federal Government, tigerair, Metro Trains, V/Line and the University of Melbourne. This year McCann was the second ranked Australian agency at Cannes. It has been equally recognised in effectiveness awards, winning a coveted Cannes Lions Creative Effectiveness Grand Prix for V/Line in 2014 and numerous effectiveness awards at the Australian, APAC and Global Effies, the Asian Marketing Effectiveness Awards and WARC. This year McCann Melbourne was one of just four Australian agencies to finish in the top 10 of the 2017 Global WARC 100 list of the world's most effective marketing campaigns.

Since Deutsch-Burley joined the agency, McCann has invested significantly in its integrated offering, introducing full-service media in-house in 2015 and merging its strategic, media and digital and creative capabilities under a single agency offering. The move has paid off, with major new business wins and integrated campaign launches for high-profile Melbourne clients including L'Oreal, AGL, tigerair, Bakers Delight, Victoria Racing Club, Worksafe and the University of Melbourne.