Dom & Liam have worked together at Grey London since 2013 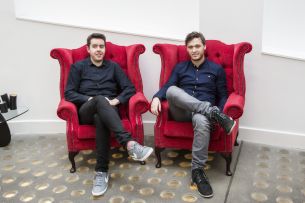 Multi award-winning creative pairing Dom Butler and Liam Riddler (known as Dom & Liam) join McCann London this week to bolster McCann’s creative talent after a hugely successful year for the agency. Dom & Liam have worked together at Grey London since 2013.

This is the latest in the line of creative hires by Rob Doubal and Laurence (Lolly) Thomson who have been at the creative helm at McCann London since 2012, and who have brought the London agency unprecedented success this year. Their 19 Cannes Lions and 9 Clio Award wins made them the most awarded UK agency at both festivals in 2016, in addition to further heavyweight wins at the One Show and D&ADs.

Dom and Liam join McCann London with several awards successes under their belts, including two recent Cannes Lions Silvers and a Euro Effies Gold and Silver last year. Liam, while at 303 Mullen Lowe in Australia from 2011-2013, had previously won Gold in the Australian Cannes Young Lions and also took Silver in the global competition. Dom meanwhile picked up a number of his own accolades as a student (D&AD Best New Blood, YCN and One Show), followed by The Drum Print Ad of the Year in 2013.

While at Grey they have worked together as creative leads for WildAid and also for clients including Gillette and The Times/Sunday Times. They also contributed to pitch wins for Scope, McVitie’s, Braun, General Mills and Post-it.

Laurence Thomson said of the appointment: “We’re always looking for a great talented team call Dom & Liam - these guys fitted the bill perfectly. With their award-winning ideas and creative know-how, we are sure they will make a positive contribution to our winning streak at McCann London.”