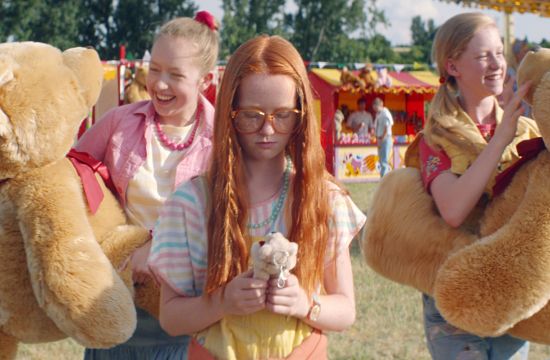 The SUBWAY® brand has launched the SUBWAY® #WinLikeJanet Facebook game as part of a multi-channel marketing campaign created by McCann London to promote the new limited-edition Mango Chicken Sub, which is being introduced to THE SUBWAY LUNCH™ as a summer special.

The activity forms part of a £1.8 million campaign which will include a four week national TV and OOH advertising campaign, supported by VOD, digital activity, in-store promotion and a consumer PR campaign led by SUBWAY® Famous Fan Louis Smith.

The #WinLikeJanet game builds on Janet, the star character in the brand’s new TV commercial which launches on national TV this evening. The TV spot introduces us to Janet who has struggled to get a good deal all her life: we see her at the riding stables riding a donkey when all the other little girls have been given beautiful looking steeds. We also see her at the fair with her friends having knocked down the coconuts at the coconut shy. But instead of winning one of the huge teddy bears hanging from the stall, she is presented with a tiny bear on a key ring. She endures substandard holiday hotels and disappointing speed dating experiences before she reaches a SUBWAY® store, where she basks in the feeling of satisfaction from being able to choose from a range of subs and a drink as part of the £3 value SUBWAY Lunch™.

The TV spot runs alongside the #WinLikeJanet Facebook game which gives players a chance to win the bear that Janet never won. It is an online Teddy Bear Hunt using Google Street View.Every weekday for a month, 5 giant bears will be released on a bespoke SUBWAY® Facebook appand players will search the Google Street View map in the UK and Ireland to win a bear. Clues to the bears’ whereabouts will be released on the SUBWAY® Twitter feed with help from SUBWAY® Famous Fans Louis Smith, Anthony Ogogo, Tommy Bowe and Holly Bleasdale.A total of 100 bears will be released over the promotional period.

The #WinLikeJanet campaign is an extension of the recently launched My Sub, My Way™ integrated campaign platform seen first in May with ‘Keith’ and the launch of the Tandoori Chicken flatbread product.  My Sub, My Way™ emphasises the customisable nature of the SUBWAY® menu, empowering consumers to order their Sub, flatbread or salad just the way they like it.

Commenting on the launch Manaaz Akhtar, Head of Marketing for the SUBWAY® brand in the UK and Ireland said: “We are constantly looking at ways to improve our existing menu and provide our customers with new and exciting lunchtime options that tempt not only their taste buds but their wallets too. With great value for money now a crucial deciding factor in any lunchtime purchase, we are delighted to announce the addition of the Mango Chicken to our SUBWAY LUNCH™ as it represents what the SUBWAY® brand has always been about; choice, taste and freshness.”

Brief: Get consumers to try the new Mango Chicken Sub as part of

the £3 SUBWAY® Lunch by showing how SUBWAY® offers added

value and empowers people to have “My Sub, My Way”