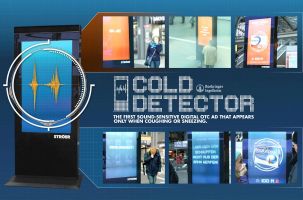 McCann Worldgroup has created a new innovative billboard, that detects flu symptoms among passing commuters on-site at Berlin Central Station, one of the most contagious spots in Germany for this illness. The Cold Detector is a digital, interactive billboard that identifies sneezing and coughing sounds within a five-metre-radius and reacts with a recommendation for the correct cold remedy. The agencies from McCann Worldgroup Germany, McCann and MRM//McCann, developed the visionary project for a large German pharmaceutical company. The Cold Detector opens up new targeted opportunities for OTC-advertising.

Many people tend to ignore the first symptoms of a cold such as sneezing and coughing. This holds especially true for employees, with three out of four people going to work despite displays of first signs of a cold. This is where the cold detector comes in: by making pedestrians aware of their health status as well as providing them with the appropriate OTC drug and the next pharmacy. In spring, the Cold Detector was first tested at Berlin Central Station – with great success. At this traffic hub, characterised by its high density of people and pathogens, many travellers were made aware of their first symptoms of a cold, the adequate medical preparation as well as of the nearest pharmacy. The idea originated with McCann Germany, the digital billboard was designed and build by the Creative Technology Team from MRM//McCann Germany.

The cold detector uses the newest sensor technology as well as a combination of directional microphone technology to filter its surrounding for acoustic vibrations, with the built-in sensors reacting to volume, direction and distance of sound. A sound detection system then analyses the acoustics. When the cold detector identifies sneezing and coughing, the sound is translated into a personalised message and the suitable medication is recommended along with a reference to the nearest pharmacy. The combination of special sensor technology and artificial intelligence creates a new form of individual targeted advertising.

“Millions of people go to work despite displaying first symptoms of a cold. This often results in failures as well as in further infections of other people. The Cold Detector sensitises people for their early symptoms in the right place and at the earliest time possible,” said Elke Klinkhammer, CCO, McCann Worldgroup Germany.

“Our Cold Detector identifies a very specific target group and reaches the affected people exactly where they their spend time every day. The Cold Detector offers the opportunity to alleviate the further course of a cold individually and can even curb the large flu epidemics throughout society,” added Johan Ohlson, ECD, McCann Germany.