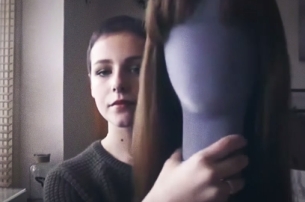 An inspirational awareness advert from children and young people’s cancer support charity CLIC Sargent featuring one teenage cancer patient’s story hit cinemas this week, thanks to Digital Cinema Media (DCM), the UK’s market leader in cinema advertising, who generously supported the charity with cinema space. The film has already been screened 1000 times across the UK, with the campaign expected to run into July.

The uplifting 70-second ad titled ‘I’m still here’ was made on a pro-bono basis by advertising agency McCann Enterprise and sees 18-year-old Charlotte Eades, who is supported by CLIC Sargent, talk through what life has been like since doctors found tumours in her brain and spine in July 2013. The film is set against a powerful background of personal photographs and video taken during treatment.

The film was made to raise awareness of the impact of cancer on young cancer patients like Charlotte and CLIC Sargent’s vital support – and also asks the public to support the charity’s  #3outof3 appeal for donations.  Since it launched online on 10 June the film has been viewed over 93,000 times.

Sybilla Harvey who is part of the creative team at McCann Enterprise, and the writer of the film, found Charlotte while researching the project. As well as being an ambassador for CLIC Sargent, Charlotte also has her own YouTube Channel which she set up 11 months ago to inspire other young people with cancer.

Will Shepherd, Creative Director at McCann Enterprise, said: "We wanted to engage people with one young person’s story, in just over a minute, and using the visual material from Charlotte's life meant we could do that in an impactful and visceral way.

“Working with Charlotte has been a real privilege for us. Her spirit and grit are inspiring, and that comes out in the film.”

Zoe Jones, Marketing and Insight Director at DCM, said: “CLIC Sargent's new ad sends out an extremely inspiring and important message to young people. With over 77% of the GB population being cinemagoers, we're proud to support them with the launch of their campaign, to broaden its reach and to help them target cinema's young, upmarket and early adopting audience.”

Liz North, CLIC Sargent’s Director of Communications and Campaigns, said: “One of our key strategic goals is to expand our support for young people, so we asked McCann Enterprise to help us paint a picture of what young people with cancer face, and why more support from CLIC Sargent is vital.  Our new ad, ‘I'm still here’, does exactly that.

“We are incredibly grateful to the team at Digital Cinema Media for their support, which will help us reach an even larger audience.”