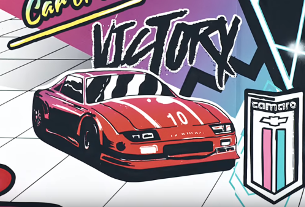 To commemorate this momentous occasion as well as Camaro’s illustrious past, which includes six unforgettable generations and more than 5 million units sold, Chevrolet is celebrating with an interactive timeline and retrospective video, both viewable on www.CamaroFifty.com.

The interactive timeline — utilizing the one-of-a-kind 11-by-60-foot mural created by Chevrolet and its advertising agency Commonwealth//McCann collaborating with the design collective ILOVEDUST — allows users to explore artwork of each Camaro generation to uncover special photos and facts that showcase the Camaro’s rich history and its evolution over the course of five decades.

“Through the course of its iconic 50-year history, Camaro has been a reflection of the times, forging in passionate influences from customers, development teams and racing technology,” said Tom Peters, director of exterior design, Chevrolet Performance Cars. “What has remained consistent is the beautifully simple and powerful sculpture that has stayed instantly recognisable to our customers and enthusiasts of all ages. I have the same passion today as when I saw a Camaro for the very first time. It just makes you smile!”

The retrospective video celebrates all six generations and chronicles the connection between Camaro’s design and performance and the enthusiasts who owned them.

“Camaro fans share a lot of creative passion for the car — passion for performance and for styling — that was passed along in every generation,” said Al Oppenheiser, Camaro chief engineer. “Camaro’s 50th birthday reminds us of Chevy’s history of ingenuity and design excellence. We want to honor our past by creating more exhilarating and stunning Camaros year after year, and that’s what we plan to do.”