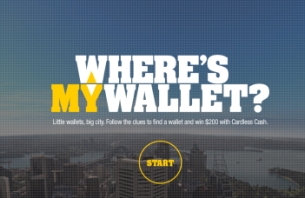 ‘Where’s my Wallet’, M&C Saatchi’s interactive treasure hunt for CommBank, was named both FWA Site of the Day and Mobile of the Day on 4 January.

The double recognition on the globally prestigious FWA – the Favourite Website Awards – is a rare feat.

The game hid wallets in a 125 gigapixel panorama of Sydney – the largest-ever photo taken in Australia to launch CommBank’s Cardless Cash facility.

The image, shot by Pixelcase, involved three rotating cameras taking 20,000 incremental shots of Sydney from atop the Sky Tower.

The frames took weeks to piece together for one stunning image of the Harbour City.

Cardless Cash means that losing their wallet isn’t the end of the world for CommBank customers because they can still access cash sans card.