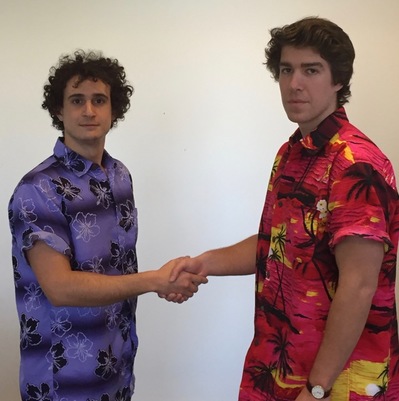 M&C Saatchi has won round 2 of the Siren Awards with a thought-provoking ad for the St Vincent de Paul Society that takes a fresh approach to the social issue of homelessness.

The touching ad, titled "Bedroom", uses the voice of a young child bidding good night to inanimate objects surrounding her to communicate the twist that she is homeless and sleeps in a car.

Creatives Nick McHugh (right) and Andrea Sarcullo (left) said children often humanised inanimate objects, and they used this insight to illuminate the difficulty faced by thousands of women and children in Australia.

LISTEN TO THE WINNERS

Says McHugh: "I was a strange child who used to say 'good morning' to my Action Man and 'good night' to my toothbrush. Reassuringly, I discovered that I wasn't the only kid who did this.  So when we got this brief, we imagined what it would sound like for a child to speak to objects around their bedroom, if their bedroom was a car. There's no jingle, no music, no spruiking, no special effects. I think it's this rawness that makes the ad stand out."

The ad was the overall and single category winner of Round 2.  The winner of the campaign category was a series of ads for the Lost Dogs Home by GPY&R in Melbourne, created by Katie Britton and Jake Barrow.  The ads take a humorous approach to cat adoption by highlighting the benefits over dog ownership.

One of the ads in the campaign, called "Nachos", was also judged the winner of the craft category. The sound engineer was Paul Le Couteur from Flagstaff Studios.

Joan Warner, chief executive officer of Commercial Radio Australia, said the winning ads were examples of how effectively radio can be used to raise awareness and change for social issues.

Says Warner: "The wining ads are shining examples of how taking a creative approach can make the community stop and think about an issue, relate to a problem and encourage people to act."

The Siren Awards, run by Commercial Radio Australia, celebrate the best in radio advertising and are judged over five rounds throughout the year by a panel of industry experts, made up of creative directors from leading ad agencies, known as the Siren Creative Council.

An additional 12 ads entered into round two were Highly Commended by judges.

Highly commended in the single ad category:
•    "Hairy Chest" for ANZ by Jenny Glover and Rui Alves from Whybin/TBWA Group Melbourne
•    "Nachos", "Break In" and "Stayyyy" for the Lost Dogs Home by Katie Britton and Jake Barrow from GPY&R Melbourne.

The round 2 winners receive an automatic entry into the finals for the 2017 Gold & Silver Siren Awards. The Gold Siren winner will be announced in May 2017 and wins a trip to the Cannes Lions International Festival of Creativity.  The client of the winning 2017 Gold Siren Award also wins a ticket to Cannes.  Silver Sirens are awarded in each of the three categories: single, campaign and craft.  There is also a client-voted award, a $5000 cash prize, presented to the writers of the ad voted the best by a panel of clients.