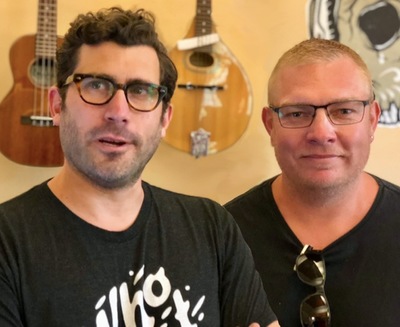 The two industry heavyweights sat down together at the Smith & Western studios, with Blackley talking to Bowman on a broad range of topics including his career trajectory, passion for obscure music and his latest move to Google.

Says Blackley: "Dave's new gig at Google means his impact will be much broader than if he was to stay in any one agency. I thought hearing about that transition would be interesting. Plus, he's widely regarded as one of the funniest people in advertising."

In the podcast, the fifth in the popular series, Bowman talks about the exciting challenges of his role, and how he has adapted to the change away from an agency culture. He describes himself as 'a kid in a candy shop' at Google, where he's tasked with connecting Google's products and platforms with brands in ways that have never been done before.

Says Bowman: "It was great to sit down with Cam and not only reflect on the past, but to talk about what it is we're doing now at Google. Besides - saying it out loud helps me understand it."

For host, Paul Dunne, the episode revealed some fresh insights and reinforced the recurring themes that have emerged as the series progresses.

Says Dunne: "For me what's really interesting is the connective tissue between the episodes. Common themes like sacrifice and humour, or the impact that someone like Neil Lawrence had on so many people are really fascinating."

The Creative Relay series is the brainchild of creators and producers Dan Higson and Nick West from Smith & Western. Each episode features the interviewee from the previous podcast, interviewing an inspiring creative of their choice.

After a successful launch last November, The Creative Relay has already attracted some of Australia's leading creatives including Ant Keogh from The Monkeys, DDB's Tara Ford and Jonathan Kneebone from The Glue Society.

So who has Bowman lined up for his next episode?

Says Bowman: "You'll have to wait and see. Which means I don't know yet."

To listen to and download the fifth episode of The Creative Relay, either go to thecreativerelay.com or
itunes.apple.com/au/podcast/the-creative-relay/id1315516649?mt=2.
view more - Creative