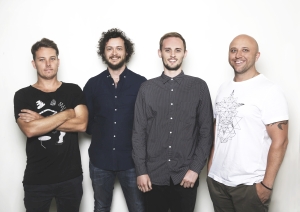 M&C Saatchi Sydney’s creative stocks have received a major boost with the appointment of four talented and proven operators.

Nev Fordyce has been hired as Senior Creative from BMF where he was the Head of Interaction Design.

He will partner Steve Hanzic who has come across from M&C Saatchi’s digital and production business Make as Senior Art Director.

His reel boats a bunch of notable work, including the 'Beef Oracle' and 'Lambnesia' for MLA, 'Be Free Earthlings' for P&O, Lion’s 'The Beer Pilgrim',  'ALDI Lunchbox' and CommBank’s ‘Investorville'.

Hands on digital-specialist Hanzic is a veteran of a number of award-winning M&C Saatchi campaigns, including: Optus ‘Cleverbuoy’, the first work to feature Google Cube to launch the Presets new album for Google Play, the ‘Wallet Run’ game and ‘Credit Cards’ for CommBank plus Stonefields’ 'Bad Reality' interactive Film Clip.

Joining them at 99 Macquarie St is duo Blake Arthur (Copy) and Matt Ennis (Art) who have built up a four-year partnership at first BWM then Ogilvy Sydney.

The pair have worked on numerous campaigns, including KFC’s ‘Stop and Smell the Chicken’, Coca-Cola global, Weet-Bix and Yellow Pages.

Independently Arthur has produced work for Sony and Toyota while Ennis worked on the award-winning Red Cross ‘Make Nuclear Weapons the Target’ campaign plus work for Telstra, Simplot and Voiceless.

M&C Saatchi Executive Creative Director Ben Welsh said: “Their work speaks for their talent but more importantly they’re mad keen to make their mark. Our clients will love them.”

Fordyce summed up the sentiment of the group when he said: “It’s an exciting year to be arriving at M&C Saatchi.

“Ben has laid out a solid vision on how M&C Saatchi plans to build on some great success, as the industry continues to innovate. I’m looking forward to working with some of the brightest minds, and contributing to the weight of such a strong agency.’