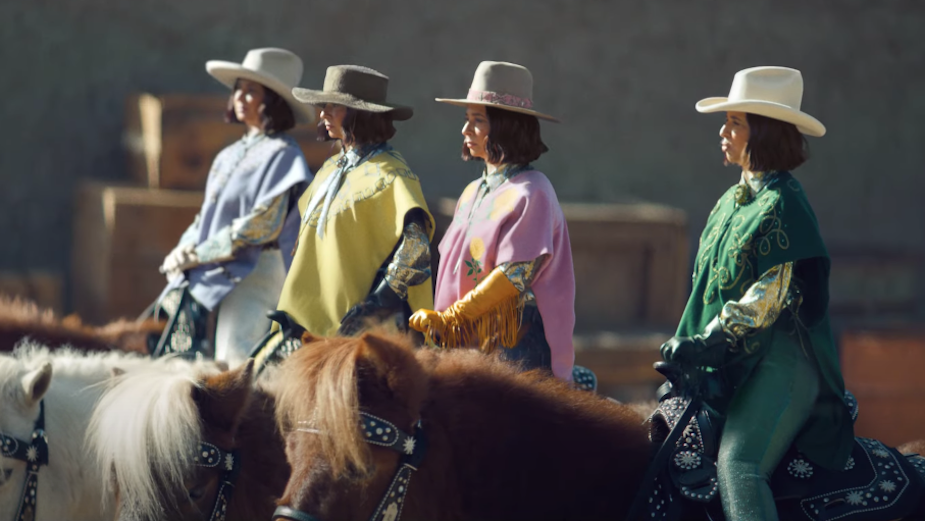 Global shopping and payments company Klarna is seeking to break out in the US market in a big way with its largest US campaign to date: a Super Bowl spot headlined by four Maya Rudolphs.

Created with Los Angeles-based creative agency Mirimar, 'The Four Quarter-Sized Cowboys' campaign features Maya in the roles of four quarter-sized cowboys—each with her own distinct style and personality. Riding into a modern-meets-classic Western town, the quartet of Mayas discover and purchase the perfect pair of cowboy boots. The spot humorously illustrates why getting what you love and paying for it over four small payments with Klarna is the smarter way to shop and, naturally, will air in the fourth quarter of the game.

“From films to her roles on SNL, Maya is exceptionally talented at playing characters, making her the perfect choice to bring the four unique cowboys to life,” said John McKelvey, Mirimar’s chief creative officer.

Klarna’s presence in the Super Bowl comes on the heels of a year of strong growth. The app has been used by more than 15 million US users and 90 million globally—with more than 6,000 retail partners in the US. Averaging 60,000 new daily downloads in December 2020 alone, Klarna’s app is one of the fastest-growing shopping apps in the US, providing consumers with the flexibility to shop anywhere online and split their purchases into four interest-free payments (as depicted in the new campaign.)

“As a brand and business, we’ve always stood at the crossroads of culture and commerce,” said Klarna CMO David Sandström. “This event represents one of the biggest cultural and sporting moments of the year, and our involvement is an exciting milestone for Klarna. As our phenomenal growth in the US has shown, consumers are looking for a better way to shop and pay, so we’re excited to showcase how Klarna delivers that in ‘The Four Quarter-Sized Cowboys.’”

Beyond the Big Game, ‘The Four Quarter-Sized Cowboys’ will come to life as an integrated campaign over the coming weeks with extended cuts and behind-the-scenes content, social activations, partnerships and more—with paid media extending the creative into linear TV, OTT and paid social.

Humanaut and Haircare Brand Not Your Mother’s Reenact Women’s Hair Dreams... and Nightmares