Trends and Insight 418 Add to collection 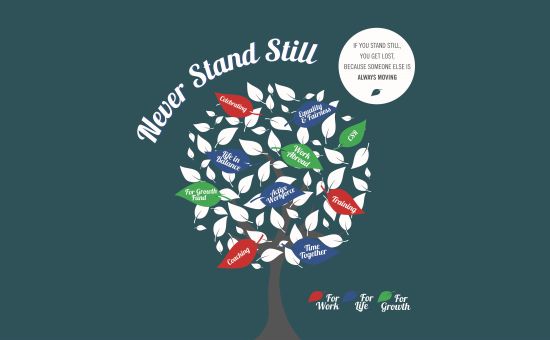 “What we’ve had to do is something that recognises that the jobs people do is not just about having a ‘good career’. Work bleeds into every aspect of people’s lives so our responsibility as an employer is to help them live the best life that the can.”

Anna Hickey has been managing director at Maxus London for just six months – and what a busy six months it has been. She’s just about to launch ‘Never Stand Still’, a programme designed to help employees in all aspects of their life, and it’s been a massive undertaking.

When Anna arrived at the media agency, she was charged with building strong relationships with clients and developing the Maxus culture. “We have grown quite quickly as an agency,” she says, as the six-year-old agency has been recognised as the fastest growing media agency over the past five years. “There’s always been something quite unique about it and as we’ve grown Nick (Baughn, CEO at Maxus) realised that we needed to make sure we kept hold of that ‘uniqueness’.”

The scheme is organised around three pillars, ‘Work’, ‘Life’ and ‘Growth’, and covers everything from Spanish lessons to equal enhanced parental leave for both new mums and new dads. It’s been created with the ambition of ensuring that Maxus is a ‘best in class’ employer and it’s about so much more than just work-related training. It also recognises that agencies have a responsibility towards the community as well as individual employees.

One eye-catching element of Never Stand Still is its comprehensive and supportive Parent Commitment. It includes equal enhanced paternity and maternity leave, paid childcare emergency days and a parent buddy system. In an industry still criticised for its lack of diversity in senior levels and structured around rather old school assumptions about gender and family (Dad works long hours, Mum does all the childcare), it’s nothing short of revolutionary.

“This is an area I’m very passionate about because I’m a working mum and I have experience of how challenging it is to do both things well,” says Anna, who was inspired by her experiences working with teams in the Nordics in a previous role.

“One of the brilliant things about Maxus is that we’ve got a really diverse group of people and everyone should be able to access this. We have gay marriages, we have people who have adopted, we have people who are single parents. What I don’t want is for people who work here to feel like they can’t succeed in their career because of their unique life circumstances.”

There are plenty of juicy employee perks to talk about (the two hours’ of gym and exercise time built into working hours seem particularly appealing in this season of festive parties and lunches), but the aspect that Anna is proudest of is ‘Maxus Calling’, an initiative that aims to touch the wider community.

Maxus Calling is a school liaison and apprenticeship scheme that aims to broaden access to the advertising industry and increase diversity. In the UK, agency intake comprises largely of middle class, well-connected graduates – Anna hopes to ensure that the brightest sparks are given a chance to thrive, whatever their background.

“I was really keen to make sure that we can bring in people who haven’t been to university but who are smart and keen,” she says. In the summer, the agency will open its doors to 50 school leavers, who will learn about the advertising industry as well as getting advice about interviews and writing CVs. At the end of the event, up to five apprenticeships will be offered to attendees who really impress them.

For now, Never Stand Still is limited to the UK, but the global leadership team have been impressed and are presenting it to other local teams – it will be up to local leaders to decide whether to adopt it and how to adapt it to the needs and priorities of their own countries.

Never Stand Still officially launches in January, but many elements have already been activated. It coincides with Maxus’ recent move to a hip, new building. “It [Never Stand Still] is an emotional manifestation of what the building stands for. The way it’s been structured is about getting people together, getting them away from their desks and working in a more agile way.”

The old offices, though, played a crucial role in formulating the initiative. The team painted three walls – one on each floor – turning them into blackboards to allow people to share ideas about what they wanted to see Maxus do as an employer. Of course that meant that there were loads of ideas to sift through – but also gave everyone at the agency a real sense of, well, agency.

“That’s a really Maxus thing. I’ve always enjoyed working at media agencies but Maxus has a great sense of togetherness, everyone is very open and happy to make decisions quickly,” enthuses Anna.

“It’s great to decide to do something – and to make it happen!”