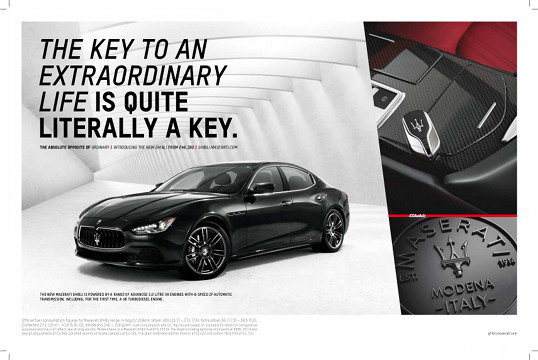 Maserati, the luxury Italian car marque is launching its new model, Ghibli, in early 2014. The media campaign starts on 16 November, and has been bought and planned by Maxus.

The Ghibli is the first time Maserati has targeted the premium executive market and it is the car marque’s first major UK ATL media campaign in recent  years.

The integrated, cross media campaign includes print, digital and OOH with key placements in titles such as Esquire, GQ, Spectator, The Times and City AM. The outdoor buy includes iconic locations such as Canary Wharf, Hammersmith and the Eastern Motion. The advertising campaign runs until early December.

The advertising campaign is supported by a digital partnership with The Telegraph running until February 2014. The activity will run across online, print and tablet. This includes an online hub that works with a parallel scrolling microsite and DPS advertorials, both of which will tell the Maserati and Ghibli stories .

mcgarrybowen New York is the creative agency and Ocean Outdoor and Kinetic have provided the outdoor sites.

Andrew Reeves, Account Director, Maxus comments: “Maserati is iconic and much loved for its quality, design, heritage and engine sound.  The Ghibli is a new entry point for Maserati and this meant we had to deliver a deeper level of understanding for the marque within a new target audience.  While clearly aspirational and well known, there is an element of the unknown about Maserati. Our challenge is to educate potential purchasers, building awareness and interest as this new model goes on sale in the UK.”

James Cowan, Marketing Manager, Maserati GB, says: “Ghibli is set to define new boundaries for Maserati as it is the first time we’ve focussed on the Premium Executive market. Maxus has helped identify and target our Ghibli consumer and the subsequent media buy and Telegraph partnership both look set to launch Ghibli in a way that is reflective of Maserati’s brand values as a luxury marque.”