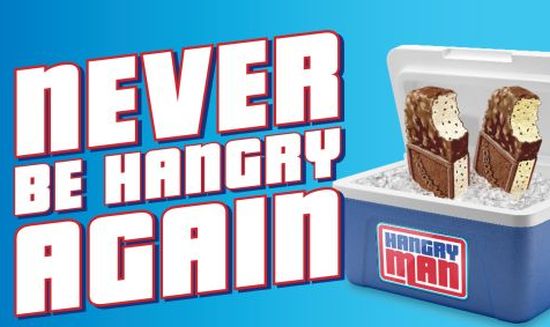 MAXIBON is a serious snack made for serious hunger. But it’s got a serious problem. It melts. Not ideal when you’re having a crack at the rest of the snack category.

The 2014 MAXIBON promotion from Peters Ice Cream and Leo Burnett Melbourne aims to defeat this problem with the invention of the world’s first portable miniaturised cooler – called the Hangryman. Yet another thing for blokes to strap to themselves.

Yep, blokes already strap on tool belts, workout belts, diving belts, repel ropes, surf straps, iPhone armbands, parachutes and gun holsters. But there was one thing they hadn’t been able to strap onto themselves – the Esky.

The Hangryman will see Aussie guys finally able to snack on MAXIBON ice creams everywhere. The portable cooler chills two MAXIBONs and clips onto every kind of belt, from tool belts to black belts to seat belts, and is specifically designed to stop guys getting hangry (the worldwide term being used to describe hungry-angry people).

Emma-Jane Collins, Head of Marketing at Peters Ice Cream said, “We love how the agency has built on the snacking occasion by delivering a solution for anytime, anywhere consumption of MAXIBON.”

“It would be great to see the Hangryman pop up at barbeques, sporting events and construction sites around the country, becoming a branded talking point amongst blokes. We see this idea being bigger than a run-of-the-mill promotion,” Collins said.

As the Hangryman was invented for the everyman, two everyday men have been charged with launching it. In some B2B (bloke-2-bloke) marketing they’re wording up the rest of Australia’s menfolk.

“MAXIBON the brand, is famous for rather unorthodox promotional products. We knew their fans would be asking, What will they release next?” said Leo Burnett ECD Jason Williams.

Williams continues, “It’s a tough ask turning an ice cream into a genuine snacking brand. The Hangryman’s been devised to improve the consumer’s experience with the brand by having a very real and genuine purpose. It’s a tangible physical product that blokes can use and re-use.”

When the promotion ends, the Hangryman can live on, giving fans refill offers and other ongoing rewards at point-of-sale.