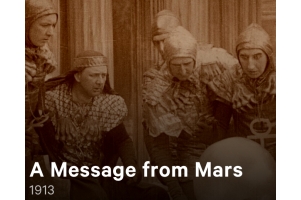 A Message From Mars was the first ever British Sci-fi film, released in 1913, and has been recently restored by the BFI National Archive. The film is given a new lease of life by its brand new score from Matthew Herbert and New Radiophonic Workshop, commissioned by the BFI and the BBC.

"The plot, which echoes A Christmas Carol, concerns a Martian exiled to Earth with the mission to change the heart of a selfish man.

This fascinating film was based on a highly popular stage play which saw many revivals over 30 years in Britain. It features the first on-screen imaginings of Martians by a British film-maker, as futuristically clad members of the Martian court. Thought transference, instant space travel, mind control and the use of a far-seeing crystal ball all feature in this ground-breaking film. Restoration specialists at the BFI National Archive, in collaboration with Dragon Digital in Wales, spent over six months painstakingly assembling the full-length film from two shorter versions and a tinted print held by the Museum of Modern Art." - BFI