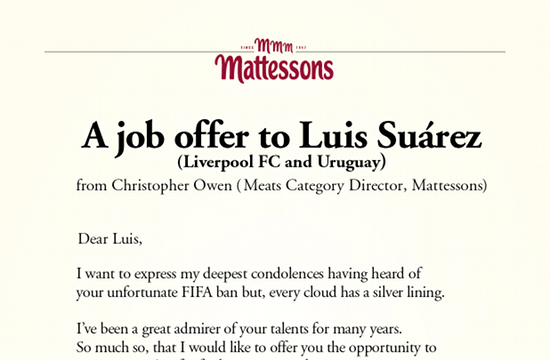 Kerry Foods-owned brand Mattessons has created a new role in a bid to attract a star new recruit - and capitalise on Luis Suarez’s appetite for international footballers.

Despite Suarez's promise never to bite again, the team at Mattessons believe he would be ideally suited to the role of "official meat taster" during his ban from football - and plans to launch a new range of footballer-flavoured products to tempt him to take the job. 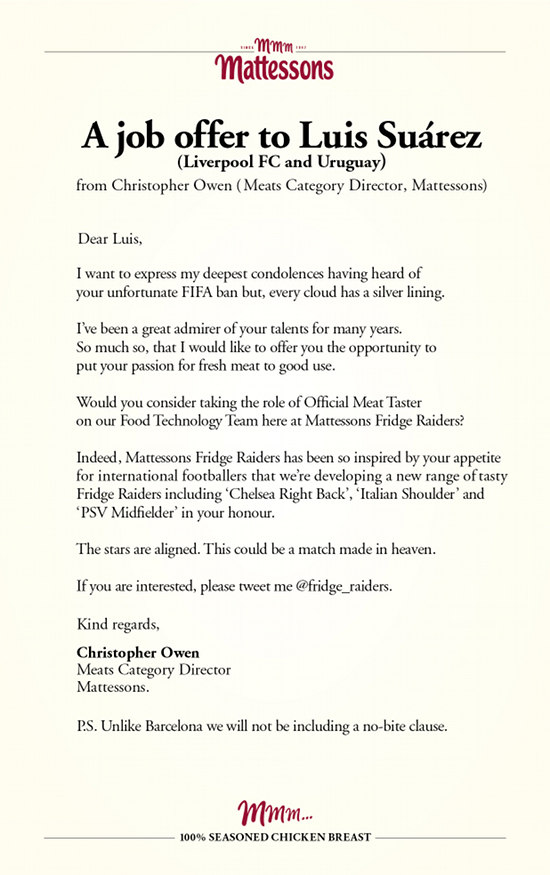 If Suarez takes the job, Mattessons will launch three new bespoke flavours of Fridge Raiders in his honour: ‘Chelsea right back’, ‘Italian shoulder’ and ‘PSV Eindhoven midfielder' – celebrating those players he has taken a bite out of - Giorgio Chiellini (Juventus), Branislav Ivanovic (Chelsea), Otman Bakkai (PSV).

The campaign follows the launch last week of two print ads from Mattessons, ‘Luis, if you wanted to bite an Italian that bad, we’d have sent you a pack of these…’ and ‘Luis, it’s not all doom and gloom. You can still sink your teeth into a Brazilian’, which ran in the Daily Star and were promoted on the Fridge Raiders Facebook page and Twitter page.

The job offer has caused quite a stir online. Alan Sugar has tweeted about it and Paddy Power is now giving odds on whether or not Suarez is going to take the job.

Mattessons Meat Category Director, Chris Owen, commented: “Luis was the obvious choice. He’s out of work and shares our passion for fresh meat. If we can get him on our side, we’re confident we can take a significant chunk out of the snacks market.”

International distribution for the range may also be on the menu too as Victoria Southern, Marketing Manager, commented: “We’re putting our money where our mouth is on this one and expansion into Uruguay seems like an obvious next step.”