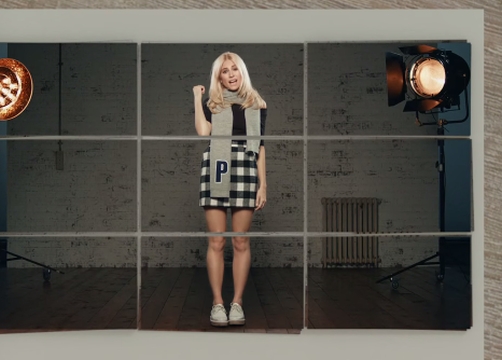 The films are a visual interpretation of the classic children’s mix and match books and see Pixie Lott star alongside a cast of children and adults of all ages. The films were shot at Black Island Studios, edited at Marshall Street and then four weeks of post-production through Absolute.

The award winning illustrator, Marion Deuchars was asked to contribute illustrations and animations for the films and her distinctive typography can be seen throughout. Well-known for her illustrated children’s books and simple yet beautiful iconography, Marion was the perfect choice to help bring the advertisement to life and add a little extra Christmas magic.

“It was a great film to work on and the complexity of building the nine different changing screens within the book were a real challenge. I really love Marion’s work and it was amazing that she agreed to help us on the project. Her illustrations and animation are fantastic and really give the film a beautiful charm” Ben Jones.

Caravan of Love will be released as Pixie’s Christmas single and featured on her new album ‘Platinum Pixie’, with 20p of every single sale going straight to Alder Hey Children’s Charity. Talking about the campaign Pixie Lott commented: “I am really honoured to be involved with and supporting Alder Hey’s Alphabet Scarves campaign. It’s a fantastic initiative and will raise much needed funds for the children’s hospital. As part of the campaign, I am also delighted to be singing and releasing the beautiful Caravan of Love, with proceeds from each single sale going to Alder Hey Children’s Hospital.”

The Matalan advertisement, featuring Pixie can be seen during The X-Factor in the run up to Christmas and premiered on Saturday 1st November. Pixie also stars wearing her Alphabet Scarf in Matalan’s outdoor advertising campaign, website and point of sale. Lee Pinnington, Marketing Director at Matalan, said: “We made a decision this year to fully get behind the Alder Hey Children’s Charity and, as a result, we will not be taking the cost of promoting the Alphabet Scarves campaign out of the profits we donate, to make sure as much money as possible goes to the hospital.”

The Alphabet Scarves, which have also been modelled by the likes of Britney Spears, Helen Mirren, Rod Stewart, Kylie Minogue, Tinie Tempah and Bruce Forsyth, are on sale in Matalan stores across the UK and online at www.Matalan.co.uk priced at £10 and £5 for children, with 100% of profits going straight to Alder Hey. Available in a variety of vibrant winter colours for women, men and children, the scarves feature a collegiate style appliqué letter perfect for gifting loved ones this Christmas.

The money raised by Alphabet Scarves will go towards a new state-of-the-art children’s hospital, education and research centre ‘Alder Hey in the Park’. Planned to open in 2015, Europe’s only children’s ‘hospital in a park’ will bring together excellent care, technology and design to provide the best possible healing environment for children and their families. Coupled with first class teaching and research the hospital will be designed to attract the best talent in the world.

Jason Hargreaves, Managing Director at Matalan, said: “Family is at the heart of everything we do at Matalan so a partnership with Alder Hey Children’s Hospital was a perfect fit for us. We're extremely excited to be working on such a special project together this Christmas that will help us to raise much needed funds for the hospital whilst offering our customers a perfect gift for their loved ones.”

Louise Barrett, Head of Corporate and Major Giving for Alder Hey Children’s Charity “The Hargreaves family has been a long standing supporter of Alder Hey and we are incredibly excited about our Partnership with Matalan and this Campaign.”