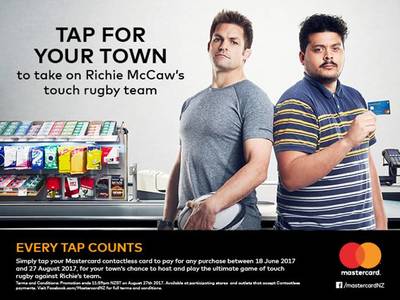 Mastercard together with McCann Sydney, has launched a campaign aiming to change behaviour of New Zealanders from a card inserting, pin punching nation, to a country of proficient tappers.

Quite simply, they're asking New Zealanders to 'tap' as their preferred payment method for the chance of their home town taking on Richie McCaw and his touch rugby team. The town with the most number of taps per capita will host the ultimate game of touch rugby at their local park - broadcast to the nation.

Says Marcus Tesoriero, creative director, McCann Sydney: "In New Zealand, rugby is religion and Richie McCaw is a god. The chance to play against him, putting one small town on the map for a day is going to be priceless."

The campaign, 'Tap for your town to play Richie', seeks to evoke a sense of home pride for New Zealanders, making tapping a 'town duty' as locals tap it out for a chance to see and play their hero, Richie McCaw.

Says Sarah Pike, head of marketing and communicatons Australasia, Mastercard: "We're excited to give the whole of New Zealand an opportunity to take part in this. All they have to do is tap, for the chance to play Richie in the ultimate game of touch. It'll be a David versus Goliath battle."

The first phase of the campaign is supported via TV, outdoor and point of sale, along with digital and targeted social executions. Taps will be counted from 19th June - 27th August before the winning town is announced and anticipation builds in the lead up to game day.