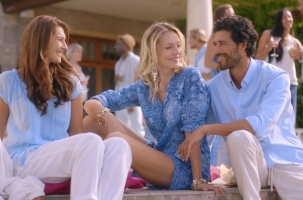 ‘Dreams Through A Lens’, promoting the Swedish fashion retailer’s sustainable summer 2015 collection, follows a model as she walks alongside the sea, through the sand dunes and into the grounds of a sprawling Mediterranean villa.

Through production company She Shoots, Mary McCartney developed the concept, directed and took photographic stills for the spot.  The challenge in post was to maintain a light, bright and cool tone throughout.

ENVY colourist Vicki Matich comments “The biggest challenge was consistency of weather, skin tone and hair.  Starting on a beach, it’s all shot outside and follows the model up to a beach house. Unfortunately, the clouds came in for a few shots and it took a bit of work to keep that feeling of sunshine throughout. The client also wanted the model to have very light-blonde hair so I had to key, track and highlight certain areas of her hair as she moved through the scenes which, although time consuming, I think ultimately worked very well! It was shot beautifully so it was a pleasure to grade.”

ENVY Editor, Alex Lea says: “Our edit helped to build a narrative of her journey from the beach to the party, showcasing the clothing and emphasising the relationships between the characters, whilst holding onto the joy of summer. This was all made easier by how beautifully the spot was shot and graded”.