Travis Barker and KennyHoopla take a drive in a Porsche Taycan Turbo as they give their ‘SURVIVORS GUILT: THE MIXTAPE//’ record the ultimate car test 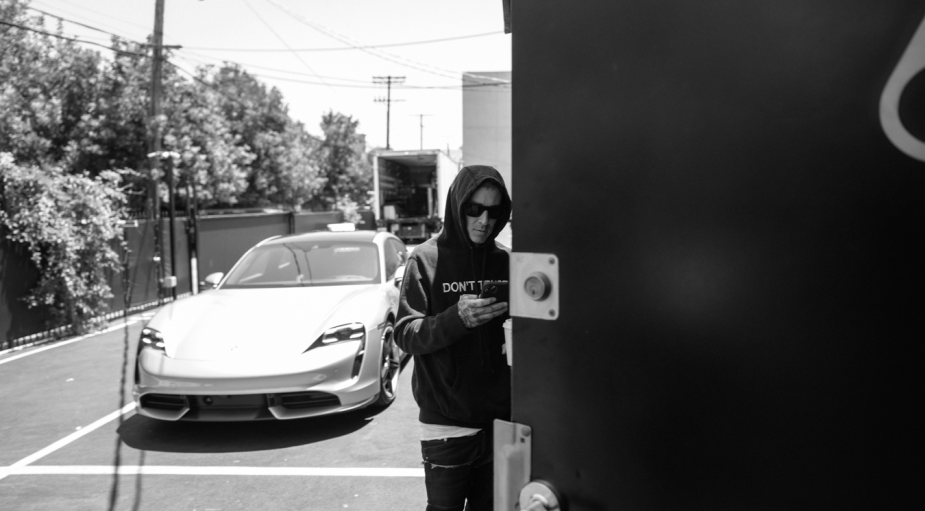 MARVIN and Porsche Cars North America, Inc., team up to launch Sound and Driven – a brand new series of short films featuring some of music’s most respected artists and producers as they take their records on the legendary car test, in the all-electric 2021 Porsche Taycan Turbo with a Burmester 3D High-End Surround Sound System with a total output of over 1,455 watts and 21 individual controlled loudspeakers. Historically, artists and producers would jump in a car and drive to give their finished record a final intimate listen before giving it the final approval.

Sound and Driven follows a carefully curated selection of artists and producers on a journey around Los Angeles in a Porsche Taycan Turbo as they discuss the magic behind their collaboration. The curtain is pulled back as we learn about the inspiration behind the music, working together, how the record was made, and how they approached it creatively and technically.

In the first episode of Sound and Driven, Porsche invites us to join artist/producer Travis Barker and singer/songwriter KennyHoopla as they leave the iconic Larrabee Studios in North Hollywood for a drive around Los Angeles. The artists reflect on their process of making their collaborative record ‘SURVIVORS GUILT: THE MIXTAPE//’ discussing their inspiration and creative approach to their music.

Travis describes the instant connection he felt to Kenny as an artist, saying: “In a time where music is kind of filtered or watered down, there's an artist like Kenny that means every word he says. And he's so adamant about writing every lyric and the feeling or the emotion that a song brings him.” The collaboration between these two artists came naturally – the first night they met they wrote the track “estella//” from beginning to end.

On his collaboration style, Travis explains: “I like experimenting and taking the artist and the listener on a journey. With Kenny that was my job: to execute and find that sound for him. So with that being said, I don't feel like another artist will make a body of work like this.”

Kenny has always found the car test to be the ultimate sign off with his music: “The car test is like the 101. You just get in the car, and you drive around, you make sure it smacks in the speakers, and the song is never finished unless it passes the car test, for me.”

Kenny describes his pride in the chances they took with this record: “That’s what I love about this project, it just sounds like, risky,” Kenny says, “I guess you could call it commercial, but we did so much, things that a lot of people wouldn’t do for something to be at the forefront.”

Marvin Scott Jarrett, co-founder of MARVIN Media and executive producer of Sound and Driven says: “After meeting KennyHoopla at our photoshoot and feeling a connection with him, I realized he and Travis would be the perfect pair to feature in the premier episode of Sound and Driven.”

“Building relevance with new audiences starts with understanding who they are and what they are passionate about. Music especially is a passion point and if you can get a peek behind the curtain of an artist and producer talking about their music during the intimate and infamous car test, all the better,” said Pedro Mota, Vice President of Marketing, Porsche Cars North America, Inc. “Teaming up with MARVIN and the industry’s rising artists for Sound and Driven was the perfect collaboration. The Taycan provides an exceptional sports car for an unparalleled music experience.”

STARS: KennyHoopla (the artist) and Travis Barker (the producer)