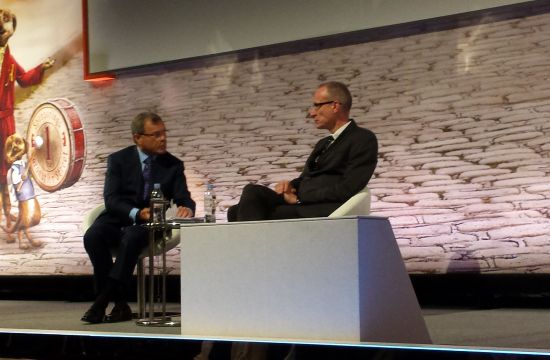 Google is 'all-powerful', the growth of native advertising is 'inevitable' and the Edward Snowden revelations have been 'seriously under-estimated'. WPP's Sir Martin Sorrell took to the stage at Advertising Week Europe to share his views on the disruptions, opportunities and threats faced by the advertising industry and media owners.

He was in conversation with News Corporation CEO Robert Thomson to discuss the future of news and advertising.

In Sorrell’s crosshairs was Google, a company that he characterised as the biggest in the planet. However, while much has been made about the threat that tech giants like Google and Facebook pose for media and advertising agencies he argued that that the secrecy surrounding costs and calculations for advertising and audiences on these platforms means that networks like WPP still have a vital role to play for clients.

“When people question our lack of transparency I inwardly laugh because if you go to Google and ask how the algorithm works they say ‘what??’. If you go to Facebook and Twitter it’s the same,” he said. “Our clients would not give Rupert Murdoch or Robert Thomson control of their media planning and buying budget, so why should they do that with Google or Facebook or Twitter? There has to be a third party, namely ourselves, who can evaluate it.”

Edward Snowden and the NSA revelations was also revealed to be a potential disruptor for the media and advertising industries. “I think we underestimate the importance of this for consumers,” said Sorrell. He admitted to being concerned about heightened awareness and vigilance around online security and privacy as 25% of WPP’s business currently revolves around data.

As far as native advertising was concerned both Sorrell and Thomson agreed that transparency and creativity were key. “Content-side, NewsCorp has become much more flexible in how goes about working with clietns. The boundaries between the editorial and business sides of the business is blurring. That’s fine as long as it’s clear consumer that this is sponsored content, or that there is someone at the back paying for it. As long as there is transparency it’s fine,” he said.

The conversation also covered the growing importance of good quality content in the digital sphere. Thomson bemoaned the current obsession with measuring quantity over quality when it comes to online engagement, while Sorrell raised the point that over recent years content distributors have taken a lion’s share of revenue from content creators. “What we have to do is look at not reducing the quality of content but rather how we monetise it,” explained Thomson.

Looking to the future though, Sorrell predicted an upcoming shift in attitudes within the advertising industry and among media owners. Both, he said, have been slow to adapt because of non-digital natives running the companies and immovable legacy structures. “This generation that’s graduating from US universities is the first generation that’s experienced the Internet from the day they popped their head out of the womb,” he said.