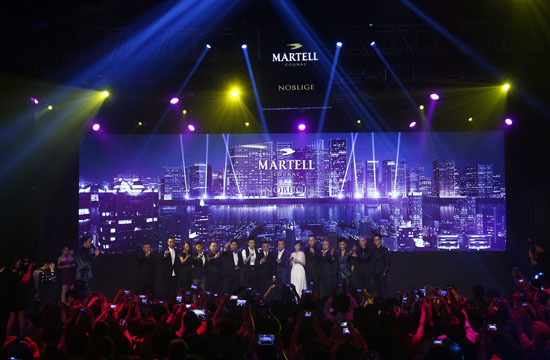 Pernod Ricard’s flagship brand, Martell Noblige, hosted a gala event on June 21 in Shanghai. The event was the latest installment in three-year program for the brand. The aim of the project is to galvanize contemporary Chinese men to embark on a journey of self-discovery leading them to achieve success beyond just money and status. This has been termed the ‘New Elegance’ movement.

At the core of Martell’s ‘New Elegance’ movement are key social influencers called the “Dang Dai Ming Shi” (当代名士) who are recruited each year to expand the social impact and inspire audiences with the elegant way of life. Bringing these contemporary noblemen together is critical to the success of the movement.

In its third installment in 2013, Martell Noblige collaborated with Magnum photographer and Dang Dai Ming Shi ambassador Justin Jin to explore the elegance in men around China. Traveling six cities all over China, (including Beijing, Guangzhou, Shenzhen, Xiamen, Wuhan and Shanghai) with the guidance of leading DDMS – such as film director Lu Chuan, and Dou Wentao, the famous host of Phoenix TV – Jin captured real stories of elegance in a film series.

Supported by television advertising and a fully integrated campaign through TBWA\Shanghai, the ‘New Elegance’ movement was brought alive through high-profile activation parties, print and outdoor advertising. There was also a social website and online interaction, spawning a huge online response.

Pernod Ricard China Martell Brand Director, Liya Zhang, commented, “We constantly challenge our agencies and ourselves to build brands that resonate with our audiences, a brand that becomes a part of people’s lifestyles. With the ‘New Elegance’ – and the visible manifestation of that in the Dang Dai Ming Shi – we have a unique and powerful property which has significantly increased both Martell’s brand image as well as sales.”

Ian Thubron, President of TBWA\Greater China, added, “When so many brands are shouting shallow ‘status’ and ‘prestige’, Martell has disrupted the category with its vision of a ‘New Elegance’ in China – not just in one campaign, but with multi-layered, fully integrated activity over several years. For a brand to take a consistent and long-term position like this in China is truly breakthrough and we salute Pernod Ricard for their approach.”