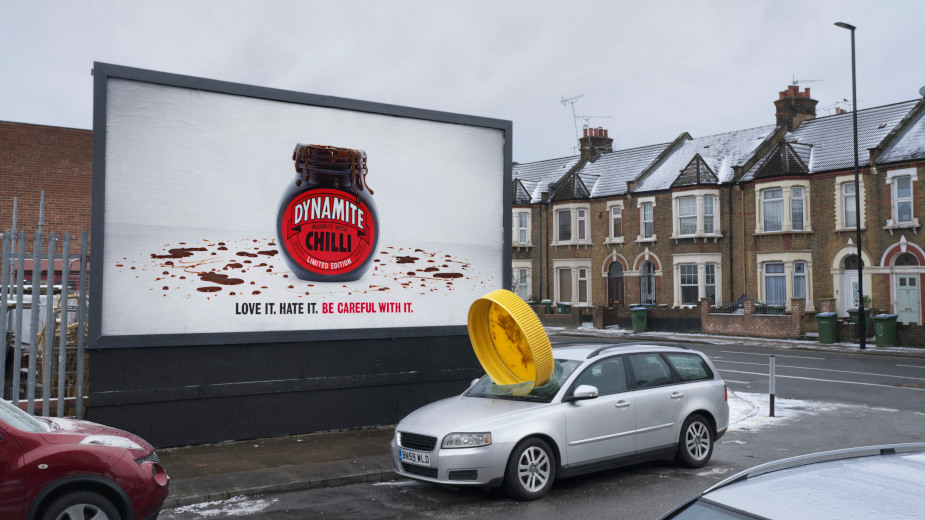 adam&eveDDB, in partnership with Mindshare and Kinetic, have delivered a suite of explosive OOH special builds to celebrate the launch of chili-infused Marmite Dynamite, encouraging both lovers and haters to handle the new product with extreme care.

The launch execution features the giant lid of a Marmite Dynamite jar, which has exploded out of a 48-sheet poster and into a nearby car windscreen. Follow up executions feature huge lids blown skywards and hooked onto nearby buildings and trees.

Whether you love it or hate it, this eye-catching and unique OOH campaign will absolutely remind you to be careful with your jar of Marmite Dynamite.

adam&eveDDB’s explosive concept for Marmite’s new fiery, chilli flavoured variant has also been extended to a social campaign on Instagram and Facebook, implemented by Mindshare and U-Studio. Media strategy developed and executed by Mindshare, with the special build OOH sites created and delivered by Kinetic and Jack Agency.

The PR strategy was developed and executed by W Communications, with the aim of igniting mass consumer awareness ahead of the product’s launch. With limited media samples available ahead of the weekend retail launch, the media strategy needed to prioritise maximum ROI media. The only way to make the Dynamite launch go with a bang was to secure a high-profile TV slot.

The broadcast first strategy delivered just that, with W Communications securing over three-minutes of prime TV coverage with This Morning. The segment saw Alison Hammond and Dermot O’Leary exclusively taste-test the new product with calls to action, and even a history lesson of the brand thrown-in. This was closely followed by more than 25 pieces of national coverage with the UK’s highest reaching titles.

The explosive new spread is available exclusively at Sainsbury’s in store and online from 7th February. The first batches were delivered to stores nationwide by ‘specially trained staff’ who ensured that each jar was handled with care. A selection of digital posters by adam&eveDDB are igniting the supermarket’s car parks.

Fikerte Woldegiorgis, marketing director, Foods at Unilever UKI, said: “Marmite has always divided the nation, but our new limited-edition Marmite Dynamite promises to really shake things up with a taste explosion that hardcore Marmite lovers have been waiting for. Dynamite is the perfect combination of mouth-watering Marmite and fiery chilli. Are your taste buds ready?”

Ben Tollett, group ECD at adam&eveDDB said: “Unilever asked us to blow the doors off their Marmite Dynamite launch. We were delighted when they agreed to blow the lids off instead.”

Launching just ahead of Valentine’s Day, Marmite also hopes to help its fans to add a romantic blast to the breakfast table. Perfect on a crumpet, smothered on toast or mixed with smashed avocado, the new spread will set pulses racing on 14th February.

Marmite’s latest variant comes after last year’s popular Peanut Butter edition. Dynamite combines the umami taste of Marmite with the warm heat of chilli, and has been formulated not to overpower with the first bite. Instead, the heat and intensity builds as you continue eating. Dynamite is a limited edition and will be available for six months.