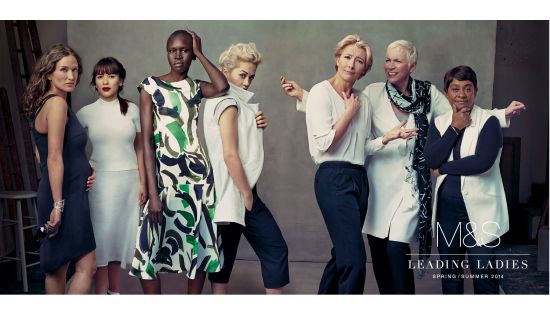 The leading ladies are presented in four tableaux images across quintessentially British settings from a coastal scene to the idyllic countryside. Locations include Camber Sands and the Cotswolds.

The Spring/Summer ‘14 campaign features a considered edit and interpretation of the season’s strongest trends. A graphic monochromatic palette and abstract prints are dramatically positioned alongside feminine pastels and shimmering metallics to depict a fresh aesthetic.

Patrick Bousquet-Chavanne, M&S Executive Director Marketing and Business Development, said: “Our Spring/Summer campaign is a celebration of style and accomplishment. These dynamic leading ladies represent the unique and diverse women of a modern Britain. They are united in their extraordinary achievements but confident in their differences.