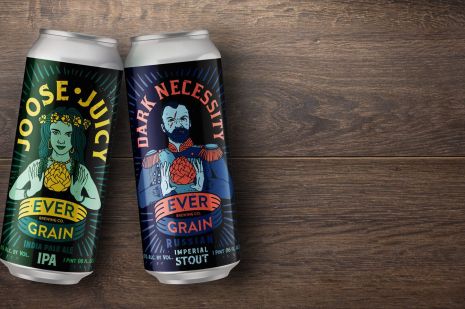 When it comes to craft beer, package design is almost as important as what’s inside. That’s why Camp Hill’s Ever Grain Brewing Company tapped Harrisburg design firm, Market Street Trust Company, to design cans for two of its signature beers. Now those two designs have been recognised by Graphic Design USA (GDUSA) in its annual American Graphic Design Awards program.

Not bad for a craft brewer that opened its doors in 2016 in a building that once housed an auto dealership.

“Great design doesn’t just grab your attention; it demands it,” said Market Street Trust Company chief creative officer James Madsen. “That’s what these cans are designed to do. They’re also designed to sell beer, because if the design doesn’t inspire people to buy the product, then why bother?”

Art director Keith Seaman describes the inspiration for the Ever Grain cans as “craft beer meets storytelling, using characters you might find yourself at a bar with.”

Market Street Trust Company focuses on branding, packaging and experiential design and is part of Harrisburg-based Pavone Marketing Group, which includes the marketing agencies of Pavone, quench and Varsity.

The GDUSA American Graphic Design Awards is an annual program that recognises the expansive ways in which graphic design shapes business and society, products and services, commerce and culture. The 2018 awards featured more than 10,000 submissions, from which only a select few were chosen as winners in a variety of categories, including packaging, internet design, advertising and more.