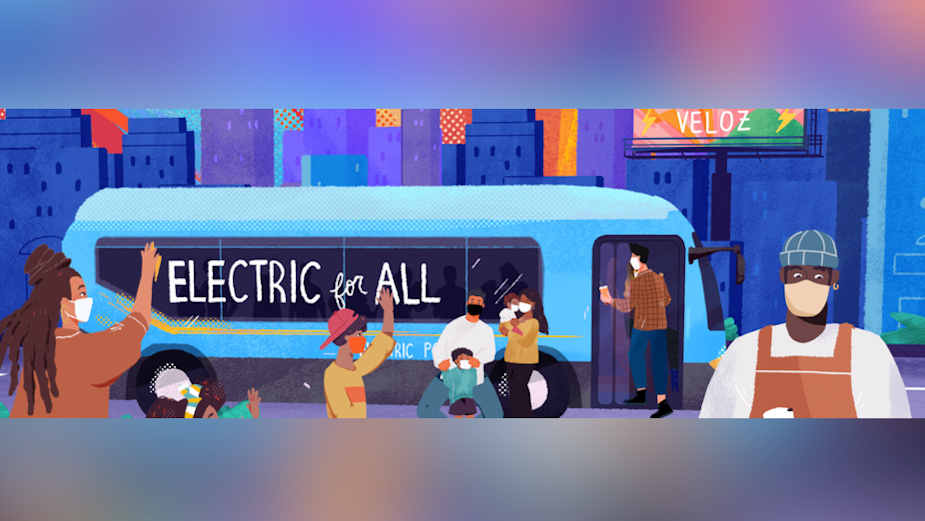 What do Mark Ruffalo, Huron, Calif., Mayor Rey Leon, Watts, Calif., leader Mama Linda Cleveland, former California Air Resources Board chair Mary Nichols and California Energy Commission chair David Hochschild all have in common? They are just a few of the superheroes on the screen and behind the scenes of Veloz’s latest Electric For All culture change campaign via creative agency Superconductor, '40 million Reasons to Go Electric', with an optimistic message the world could use right now. As California leads the way to a zero-emissions new car fleet by 2035, this campaign aims to show the country and world how to get there faster.
Previewed at the Clean Energy for America Inaugural Ball and launching 27th January as the new administration advances its clean energy agenda, Veloz’s multi-stakeholder, multi-million dollar nonprofit, nonpartisan campaign is the product of unprecedented collaboration and spotlights local and global superhero agents of change fighting for social, economic and environmental justice, celebrating California’s many cultures, and underscoring the reasons each and every Californian has to go electric.
Starring climate activist and Emmy award-winning actor Mark Ruffalo and Marvel’s Agents of S.H.I.E.L.D. star Chloe Bennet, Huron Mayor Rey Leon, Watts environmental justice leaders Mama Linda Cleveland and Jacquelyn Badejo, and Oakland, Calif., activist artist Favianna Rodriguez, the campaign features an avant-garde, bright and vibrant animation by animation house Laundry paired with an original Californian take on neo-soul-inspired music sung by the Barbadian-born, Los Angeles-based singer Ayoni.
The campaign will be promoted with paid and social media with large-scale reach, and an electric car shopping online portal that provides the most comprehensive consumer resource available on electric vehicles, with up-to-date makes and models and multiple shopping tools - including search by ZIP code tools that identify car incentives and home charger incentives via the Home Charging Advisor. All elements of the campaign are designed to reach Californians where they are, and educate, inspire and empower them to go electric.
"The sooner we transition to an electric transportation system, the less strife there will be in the world,” said Mark. “This initiative creates an opportunity to empower local heroes everywhere to choose electric transport to a cleaner, more just future.”
“California is a global leader in out-of-the-box thinking, unconventional collaborations and innovative solutions. Veloz’s campaign is a perfect example: cutting edge content, heroic alliances, and a super-powered approach to make Electric For All a reality,” commented Veloz Public Policy Board chair, Mary Nichols, who made history with Governor Gavin Newsom by issuing his executive order directing all new cars and trucks sold in California in 2035 to be zero emissions. “The market is primed, industry is ready, policy is there in California and now with new leadership in Washington, the time is now to inspire and empower everyone to go electric.”
“Veloz is putting the pedal to the metal to speed up the governor’s goal,” added Josh Boone, Veloz executive director. “California is at the bleeding edge of culture and our love affair with cars has defined and directed the automobile market for over a century. Our Electric For All campaign mixes magic and method, strategy and secret sauce to push the electric vehicle market past its tipping point.”
Veloz’s Electric For All '40 Million Reasons to Go Electric' campaign is focused on one of the largest remaining barriers to the adoption of electric cars and trucks: outdated myths about cost, choice and performance.
“Electric cars are already competing with gasoline vehicles in price and they exceed in performance - but public awareness has not kept pace,” said Veloz Board chair, Caroline Choi, senior vice president, Edison International and Southern California Edison. “That’s why Veloz has launched ElectricForAll.org, and its annual campaigns to bust the myths, provide comprehensive consumer information and tools, and show how easy, fun, affordable and important it is for all Californians to go electric." 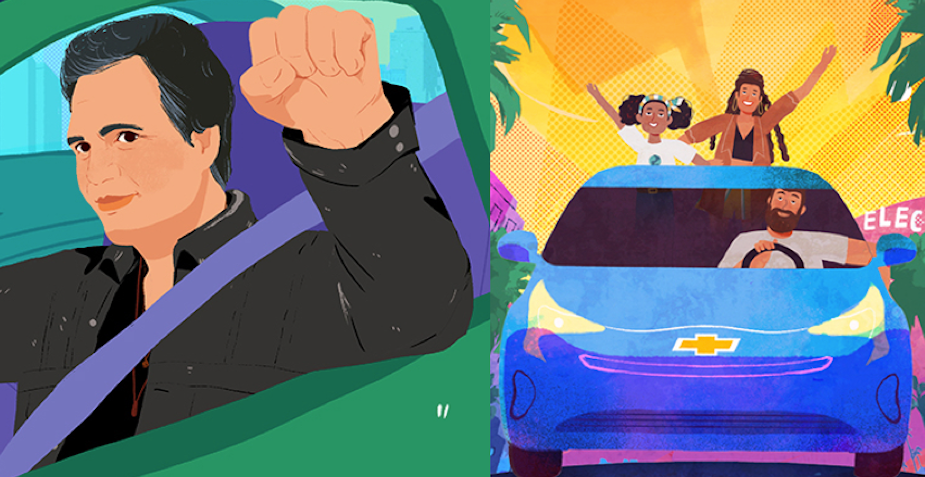 Speaking about the campaign, Superconductor chief creative officer, Chris Adams, noted: "In a time where there is so much anxiety, so much division and so much uncertainty in the world, we wanted to do a really positive, inspiring and upbeat campaign that celebrates all of the millions of reasons to drive electric.”
This distinctly Californian animated campaign mixes bright colours, hope, optimism, fun, facts and original music as it follows these superheroes on a road trip across California. Read their stories here.
Emmy winner and three-time Academy Award nominee Mark Ruffalo, one of Hollywood’s most sought-after actors and artist-activists, is co-founder of The Solutions Project, a California-based national nonprofit that supports climate justice leaders and solutionaires at the neighbourhood level making 100% renewable energy and equitable access to healthy food, land and water a reality all across the country.
Superhero actress, Chloe Bennet who stars in Marvel’s Agents of S.H.I.E.L.D. as the computer hacker-turned-superhero Daisy "Quake" Johnson has been a voice for change in Hollywood, a voice for mobilising young Asian-American voters and now she’s using her voice to electrify transportation.
Superhero Huron Mayor Rey Leon, founder of The Latino Equity Advocacy & Policy (LEAP) Institute, launched the Green Raiteros, an electric car ride-sharing service, because “Huron has the most contaminated air in the nation. To fix it you have to fix transportation, which is at the root of social economic and environmental injustice. If you cannot travel safely, healthfully, economically and efficiently, you cannot escape the grind of poverty.” Now he is creating jobs, providing safe, free transportation and improving the Valley’s severe air pollution problem.
Superhero Favianna Rodriguez, a first generation American Latinx activist artist and The Solutions Project board member, who grew up in the infamously polluted Oakland Fruitvale district, was the first in her neighbourhood to buy an electric car. “People in my ‘hood didn’t realise how affordable EVs are – now they do. The more I learned about the fossil fuel industry, and its impact on my community, the more dedicated I became to making a difference through my art, and my actions.”
Mama Linda Cleveland and Jacquelyn Badejo, superhero leaders of the Watts Clean Air and Energy Committee, a grassroots environmental justice organisation, spearhead local ride-and-drive events and work around the clock to educate, inspire and engage their fellow community members in what they see as the burgeoning green future. “We get left behind on so many movements,” said Mama Linda. “We have to be at the head of this one. It is the future. It is coming.”
“The electric car market represents a multi trillion-dollar opportunity for California to create new businesses and jobs, and move our state, nation and world to a cleaner, healthier, more equitable and prosperous future,” commented Boone. “Our campaign aims to tap the superhero in everyone to get to that future faster.”
view more - Creative