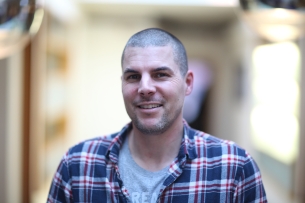 Glassworks London is very pleased to announce the hiring of Mark Holman-Harris as its new Lead Nuke Artist. Mark, who has worked both the Australian and UK markets, joins after five years at Kojo Australia where he was VFX supervisor and Senior Nuke Compositor.

A Fine Art graduate, during his time in the VFX industry Mark has worked across various platforms and disciplines. Starting his career as an image cataloguer, Mark began teaching himself 3D Lightwave software, which lead to roles at several gaming companies, as both 2D and 3D lead on projects for Xbox and Playstation.

Keen to further his knowledge and passion on 2D, Mark then moved into full time compositing roles, working on advertising, TV and film projects. Some of his career highlights include; lead compositor for feature film Wolf Creek 2, working with acclaimed Australian director Scott Hicks, and working on several independent Australian movies.

Outside of the studio Mark is a proud father of five and enjoys keeping active with trail running, especially in the South Downs. Not only staying behind the camera, Mark and his son have a cameo in a music video for hip hop artists ‘Hilltop Hoods’ and their track ‘Never Let you down’.

On his move to Glassworks Mark commented: “Returning back to London I wanted to find a company that would provide me the environment in which to use and develop both my creative and technical skills whilst working on exciting and challenging projects. Glassworks has always had a great reputation globally for producing consistently high quality work in both creative and technical respects and I am thrilled to be joining a team of passionate and highly skilled people.”

With his broad knowledge and experience in 2D and 3D in the advertising, music, gaming, film and TV industries, Glassworks is sure Mark will make a valuable and significant contribution to its expanding family.