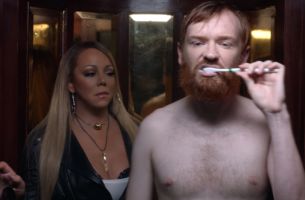 The campaign shows Mariah’s anger at being booked into a hostel swiftly turned on its head, as she and her entourage are surprised and delighted by the Barcelona hostel’s fantastic, modern features. The film ends with the world’s most famous diva becoming a real hostel believer, as she dances on a table with other travellers (and doves) to her very own double platinum hit Fantasy, in the hostel’s cocktail bar.

The global online and PR campaign comprises a three-minute film, directed by Nick Ball of Blink, and a suite of shorter format films.

This is the fourth in the series for Hostelworld by Lucky Generals, adding Mariah to other unexpected hostel guests Chris Eubank, Fifty Cent and Charlie Sheen. Marek Mossakowski, Global Head of Brand at Hostelworld, said: “Many people still don’t realise just how much hostels have changed over the past decade. Now they’ve got all the facilities you’d expect from expensive accommodation, but with at an affordable price and with a ready-made community of like-minded travellers to share experiences with. Even people with the highest standards can become hostel believers – and divas don’t come any bigger than Mariah Carey!”