Marcel's Wimoweh Out Spot for Granola 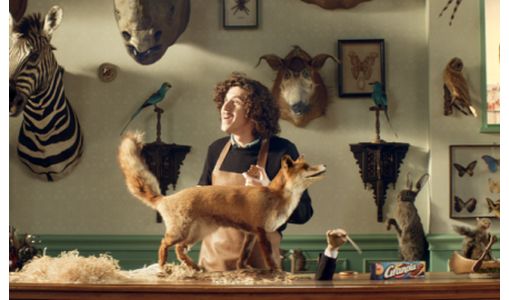 One year after the successful launch of its brand platform: "Granola always hides something EXTRA!" The brand returns to television with a new film even more offbeat. This communication platform and its unprecedented absurdity were a resounding success with a 5 points increase in brand notoriety as well as over 20% in sales growth in 2013!

Hand in hand with agency Marcel, the brand will relaunch its iconic cookie. This will be the third film in the saga created in 2013. The wacky and surprising commercial follows the 2 previous films "Mouths" and "Future".

The film, directed by Adrien Armanet a “Frenchy” from the production company Iconoclast, takes us to the workshop of a young taxidermist.

Although the setting changes, the WTF tone of voice of the brand remains the same: GRANOLA always hides something EXTRA and crazy that surprises the main hero of the film.

By lifting up his favorite cookie, the gourmand taxidermist triggers an EXTRA moment. EXTRA because once the granola is lifted up, mounted animals come to life and sing a cover of "The lion sleeps tonight" and EXTRA because of its offbeat humor creating a moment of sharing made ​​possible by the popular Granola cookie.