Luiz Sanches, Cintia Gonçalves and Rodrigo Andrade to take over 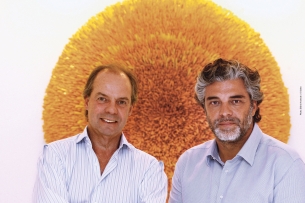 Marcello Serpa and Jose Luiz Madeira announced today that they will leave Almap BBDO, after leading the agency for 22 years – the longest running leadership team in Brazil.

Serpa and Madeira joined Almap BBDO in 1993 as Partners.  Since then, the agency has produced famous work for a broad range of clients.  This work has made Almap BBDO what it is today – not just the recognized creative agency leader in Brazil but one of the most admired and respected agencies in the world.  The agency has been named Agency of the Year at Cannes three times, and topped The Gunn Report as the most awarded creative agency in the world three times.  It has won Agency of the Year at the Clios two times, and FIAP seven times.  Marcello Serpa is a recipient of a Clio Lifetime Achievement Award – the first non-Anglo-Saxon to be recognized as such – and Jose Luiz Madeira is an inductee of the Academia Brasileira de Marketing Hall of Fame.

“It is simply impossible to overstate the impact and contribution that Marcello and Jose Luiz have had on the advertising business in Brazil, across the world, and for BBDO Worldwide,” said Andrew Robertson, President and CEO, BBDO Worldwide.  “Their work has been legendary and will leave its mark on clients’ businesses and generations of advertising people around the world.”  Robertson added, “Their consistent success is a function both of their leadership brilliance and their ability to attract and retain the very best people in the business – and that includes Luiz, Cintia and Rodrigo, who will succeed them.”

Serpa commented, “When José Luiz and I joined Almap BBDO in 1993, we wanted two things:  to create the best work in the market and keep having fun while doing that.  The fact that our agency has achieved the level of success that it has would seem to indicate that our strategy has paid off.  In the process, we attracted the best group of people an agency could dream of.  Now we get to watch the team we have in place continue to set the same exacting creative standards.

Added Madeira, "Over the years, we’ve learned that it really pays off to think before doing.  You can see that in the quality of our work.  We’ve done a lot of thinking before doing this.  We know that this is a great time to pass the baton to our chosen successors.”

Over the last two and a half years, the new management team of Luiz, Cintia and Rodrigo have maintained Almap BBDO’s creative reputation, winning international, regional and local competitions such as the One Show, D&AD, New York Festivals, London International Advertising Festival, FIAP, the Wave Festival and others, as well as 47 Lions at Cannes and keeping Almap BBDO among the top 10 agencies in the world in the Gunn Report and Directory Big Won.  They are also the most awarded agency at Effie’s Brazil.

“I am excited to work with this next generation of leadership as they carve out their own legacy at Almap BBDO,” said Chris Thomas, the recently named CEO of BBDO, the Americas.