Marc Schölermann with Another Tyre Shoot 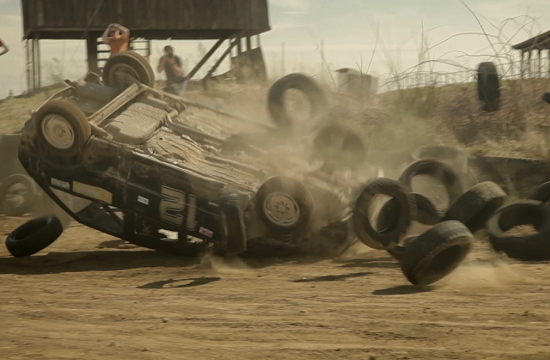 Another Film Company's Marc Schölermann never lets a problem come between him and a great ad, so faced with the possibility of being unable to deliver an idea that he and the client really liked because of the lower budget, Marc Schölermann took a holiday to think things over. Driving through South Africa, he spotted discarded tyres beside the road and - with his wife driving - he filmed whatever looked "interesting and unusual" from the back seat using his 5D.

With over thirty tyre scenarios filmed, he was able to present an assembly cut to the client and once they were given the green light, they were able to work out what else needed to be filmed.`Filming for two more days in and around Hamburg for the proper shoot were all that was required to finish off the job. This included the rally driving sequence. Schölermann couldn't persuade the driver to roll his car and when he drove instead into a wall of tyres, it didn't provide the dynamic that Marc was seeking. When the driver tried again and ended up rolling the car, Schölermann got the shot he was after. Thankfully, not only was the driver unhurt, he was very proud to have completed his first roll.

The production was by Markenfilm Crossing and the agency was Philipp & Keuntje in Hamburg.

The music is  a specially composed piece by Boris Salchow - a friend of Schölermann's.

Contact Nicky Fleming at Another Film Company for a showreel or more information on 0207 3077750.