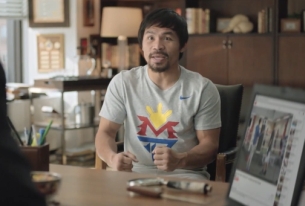 Back in November, Foot Locker, through its creative agency BBDO New York, released a commercial for its Week of Greatness featuring boxer Manny Pacquiao.  The spot called “It’s Happening,” suggested that Pacquiao and fellow champion Floyd Mayweather had finally agreed to “it” --  to meet in the ring after years of anticipation.  Well,” it “ wasn’t actually happening, at least not yet.

Since then, the stars have aligned (many have speculated due in part to Floyd’s reaction to the playful taunting of the commercial) and now “it” (the fight) is actually happening.  So Foot Locker has released a follow up spot focused on Manny’s reaction to this new development.  As you’ll see in “It’s Really Happening”, it’s a rollercoaster of emotions.