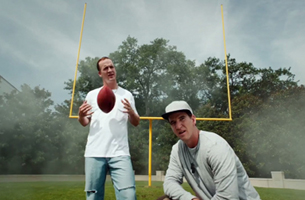 Following up the viral hit ‘Football on your Phone’, DNA’s Director X transports the NFL’s beloved Manning brothers into a fantasy world for DIRECTV in ‘Fantasy Football Fantasy’.

To promote the launch of DIRECTV’s new, exclusive Fantasy Zone channel, the first to be dedicated to nothing but fantasy football, Eli and Peyton Manning break into song in honour of the celebrated hobby. In the video, the duo takes to the gridiron, but with hip-hop getups instead of football uniforms and provocative female dancers in place of cheerleaders. The brothers conjure up a variety of humorous football fantasies, including a football filled with nachos, a goal post that doubles as a waterfall, and a shower that produces hundreds of tiny footballs instead of water. This montage of absurd events, cut with interludes of hot babes and the Mannings’ outrageous lyrics, stays true to the campaign’s signature wit.

DNA has garnered a reputation as a premier production company through industry-leading work with an array of major brands, artists, and organizations including Sony, Lexus, Target, Budweiser, and Verizon, to name a few. Earlier this year, DNA produced an energetic campaign for the Samsung Galaxy 11, and a breathtaking music video for David Gray’s single, “Back in the World.”