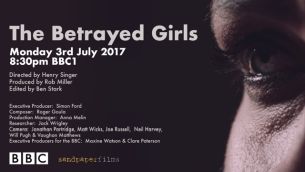 In May 2012, the revelation that nine Asian men were guilty of the grooming, rape and sex trafficking of teenage white girls shocked the nation.

But the police and social services had known about the abusers for years, and the abuse went far beyond Rochdale. From Rotherham to Keighley, it was happening across cities and towns in the north and beyond.

Following the acclaimed drama, Three Girls, this feature-length documentary hears from the real people at the heart of the story, some of whom are speaking for the first time. It features the harrowing testimony of the victims whose stories have not been told before and includes interviews with those individuals brave enough to speak out on behalf of the girls.

The film features a beautiful musical score by Manners McDade composer Roger Goula. Roger has scored a number of high profile feature documentaries including 'The Hard Stop' and 'Versus: The Life and Films of Ken Loach', and his recent credits include the last season of Inspector George Gently.

The Betrayed Girls will be on BBC1 tonight at 8.30pm.