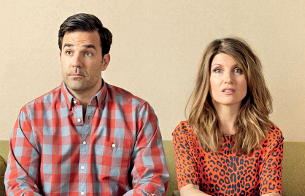 BAFTA winning and Emmy nominated sitcom Catastrophe is a single camera comedy following an Irish woman and an American man as they navigate an unexpected pregnancy and the uneasy relationship that ensues. Written by and starring Sharon Horgan and Rob Delaney, the series has garnered universal acclaim and a raft of awards since launching in 2015.

Viewing of the second series averaged 1.4m over the six episodes, making it Channel 4's second highest performing comedy of the year.

Manners McDade's Oli Julian has provided the iconic music for the show, including the memorable title music featuring himself on vocals, including whistling and yodelling.