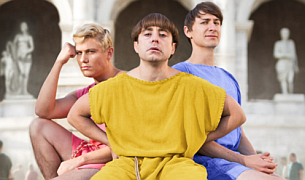 The new series will see a cast change, Joel Fry, who played Stylax has left the show. Jonathan Pointing has joined the as happy-go-lucky builder Jason. Series 4 starts with the lives of Marcus (Tom Rosenthal) and Grumio (Ryan Sampson) being thrown into disarray by the sudden departure of Stylax. This is further heightened by the sudden arrival of blonde builder, and new-Pleb-on-the-block Jason.

Producers say: "Upheaval gives way to hope when they manage to procure an abandoned toilet from crooked property developer Crassus (Robert Lindsay), which they decide to convert into Rome's hottest new wine-bar - 'The Crown and Toga'".

The new series sees the return of past cast regulars including Doon Mackichan as Flavia, Karl Theobald as Landlord, Tom Basden as Aurelius, Tom Davis as Davus and Maureen Lipman as Landlady.

Oli Julian returns as the show's composer, once again providing it's jolly ska influenced soundtrack. Julian is known for his catchy and memorable themes, having written music for top British comedy’s such as Cuckoo (BBC), and Motherland (BBC). As well as American co-productions Episodes (BBC/Showtime), and Catastrophe (Channel 4/Amazon).

Watch the first episode of Season 4 tonight at 10pm, on ITV.