Starts tonight at 10pm on Channel 4 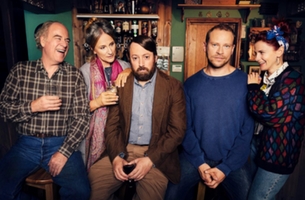 Back, an acerbic new comedy written by Emmy-award winning Simon Blackwell (Veep, In The Loop, Peep Show) and starring the inimitable and award-winning David Mitchell and Robert Webb (Peep Show, That Mitchell and Webb Look) starts tonight on Channel 4 at 9pm.

The six-episode series will follow Stephen (David Mitchell) as he takes over his late father's pub, sidelined by Andrew (Robert Webb), one of the many former foster-children of Stephen's parents. Andrew returns to town after years of travelling, to revisit the family that he thinks changed his life. Unsurprisingly, Stephen and Andrew don't get along as Stephen becomes convinced that Andrew is out to steal his life.

The show features an original score by composer Oli Julian. Oli is known for his catchy and memorable themes for comedy series such as Catastrophe, Cuckoo, and Plebs, and is currently scoring new Sky comedy-drama Living the Dream.