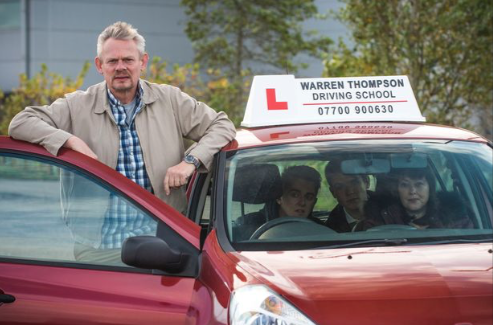 Starring Martin Clunes, ‘Warren’ is an original comedy series, written by Paul McKenna and Jimmy Donny Cosgrove. It follows a pedantic driving instructor Warren Thompson and his conflicting approach towards the world around him.

Shane Allen, controller comedy commissioning at the BBC says: “BBC One mainstream comedy is our highest priority and the toughest nut to crack. We have enormous faith in Warren as the pilot displayed the perfect alchemy of well-drawn characters, punchy funny lines, a terrific ensemble cast and in Martin Clunes a heavyweight comedy champion who we’re delighted to see step back in to the ring of a BBC One sitcom.”

Nina Humphreys has scored some of the most memorable television drama of recent years, from the heart breaking humour of Sunshine, in which Steve Coogan played a gambling addict, to Abi Morgan’s White Girl, depicting the culture clash of a white family in Bradford seeing their young daughter embrace Islam, Debbie Horsfield’s All The Small Things, an examination of the tensions in village life that erupt when Neil Pearson betrays wife Sarah Lancashire, and the acclaimed adaptation of Sarah Walter’s Night Watch, depicting love among the ruins of London during the Blitz.

The first episode of ‘Warren’ is now available to stream on BBC iPlayer.