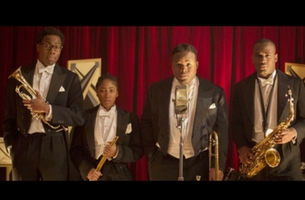 Timewasters is a comedy about a struggling four-piece South London jazz band who travel back in time to the 1920’s via a lift in a dilapidated block of flats. Stuck in the past after their ‘time machine’ is destroyed, the quartet discover that being young and black in the Jazz Age is a lot more difficult than Downton Abbey had led them to believe.

Aided and abetted by a pair of oddball twins and some 1920s luminaries (including John Logie Baird who invented the Television), the band are forced to navigate the parties and pitfalls of the Roaring Twenties while searching for a way back home. All the while, not missing the opportunity to introduce the Bright Young Things to some of the twenty-first century’s finest tunes.

Nick is a multiple BAFTA-winning British TV composer and music producer best known for composing music for television shows in the UK and US including The Cube and the popular animated series, Thunderbirds Are Go! with brother Ben Foster. Oli Julian is a composer, producer and arranger of music for TV, commercials and film. His work includes the theme music and score for two series each of hit comedy Catastrophe (C4), Cuckoo (BBC3), and Plebs (ITV2).