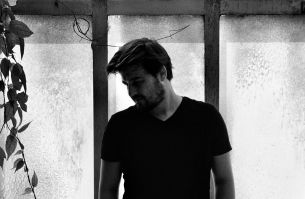 Illuminine is a collaborative project between Flemish composer Kevin Imbrechts and producer Christophe Vandewoude. Their previous two albums, debut, 2015, and #2, 2017 have been likened to the neo-classical language of Nils Frahm, and the ambient, haunting sonic landscapes of Sigúr Ros.

In ‘Fright’, a mix of close-miked guitar motifs are woven with vocals from American singer Hannah Corinne, evoking a warmth and intimacy that stands in contrast with the vast landscape of orchestral textures on Aura and ‘Dear, Utopia’ ft. Adam Bryanbaum Wiltzie. Corinne’s lilting vocal style, whilst soft, is tinged with a rawness - a calm serenity amidst the breaking waves.

The single is accompanied by a hauntingly meditative video created by visual artist and musician, Francesco Fabris, and features the Icelandic dancer Ragnheiður Freyja. The vast, monumental beauty of the Icelandic landscape, juxtaposed with close-ups of fleeting moments, the wing of a butterfly in Dying Flame ft. Hannah Corinne, the feeling of moss between the toes in ‘Fright’, evolve into a motif, linking Fabris’ visuals to one another throughout the course of the album.

Hannah Corinne describes how she approached the writing of the vocals and lyrics by searching for the emotions behind the song itself: “It was a strange process writing the lyrics because I was writing them to instrumental tracks previously composed by Kevin. So instead of writing music to fit my lyrics (which is what I normally do), I found myself laying on a dusty floor, trying to listen to what it was the music was already saying.”

Kevin Imbrecht’s describes #3 as the artistic product of a dark period during his life: a highly personal and beautifully crafted sonic diary:

“Every composition is linked to a specific moment in my life, often with major significance. But it’s not important that people know what inspired the music. Everyone can and should project their own ideas and feelings onto the music.

Based on the reactions I get, I have the impression that’s successful.“ - Kevin Imbrecht.

So often our days are caffeine fuelled, overloaded by technology and a never ending to-do list. We are more connected - digitally- than ever before, and yet we so often fail to connect more deeply with ourselves and confront our personal challenges. #3 attempts to do just that, and in doing so invites the listener to tune out the inner noise, and embrace the elements.