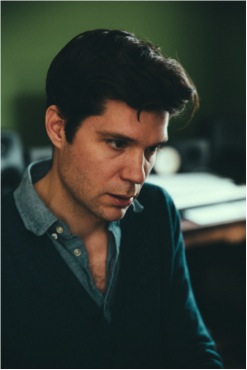 British composer Harry Escott has scored two of the most exciting new premieres at this year’s London Film Festival (October 2017). Journeyman, directed by and starring Paddy Considine centres on the impact a serious head injury has on the professional and personal life of a boxer. Dark River, the new film from director Clio Barnard, is a searing Yorkshire set drama exploring the fragility of familial relationships and features a musical collaboration with the exceptional artist PJ Harvey.

Harry first came to prominence in 2005 with his score to the influential psychological horror film Hard Candy, directed by David Slade.

Since then, Harry has worked with such stellar directorial talents as Eran Creevy on both Shifty and Welcome To The Punch; Michael Winterbottom on A Mighty Heart, The Road To Guantanamo, and Face Of An Angel; Clio Barnard on the multi award-winning The Arbor; and The Selfish Giant, a contemporary adaptation of Oscar Wilde’s short story; as well as Nick Broomfield on Ghosts; and perhaps most prominently, on Steve McQueen’s seminal debut film Shame.

I am really excited to see how people react to these two films at the festival. They both deal with some tough subject matter but, for me, Paddy’s film (Journeyman) is a celebration of love and friendship and Clio’s film (Dark River) leaves me wanting to take more care of those around me, which is a good thing for a film to leave you with!

And aside from that, in Journeyman I got to write an anti-macho piece of music for a boxing training montage: the note from Paddy was, "look man, this isn’t Rocky, alright?"… It was great fun. And for Dark River, recording PJ Harvey’s vocal on “An Acre Of Land”, a song we wrote together for the film, was a spine tingling experience.

London Film Festival takes place from October 4th to 15th, 2017. Audiences for Journeyman can look forward to the soundtrack released alongside the General Release of the film.

The PJ Harvey & Harry Escott song ‘An Acre of Land’, will also be released alongside Dark River.