Violist Stephen on The Riot Ensemble and its latest project, Solstices 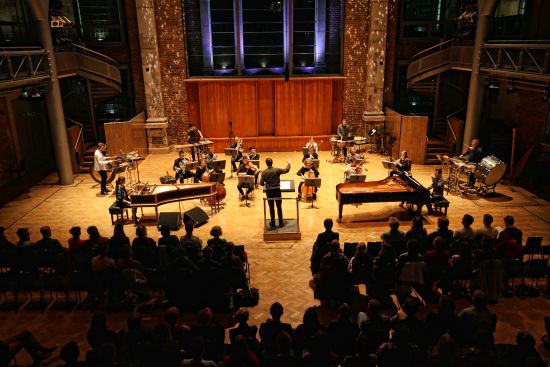 Founded professionally in 2013, Riot Ensemble has rapidly grown into one of the UK’s most distinct and important new music ensembles. Riot has given more than 180 World and UK premieres, commissioned more than thirty new works, and performed at a number of Europe’s most important festivals (Huddersfield, Spitalfields, Dark Music Days, Tampere Biennale, Nordic Music Days, and Musica en Segura).

The UK premiere of Solstices along with four other new works, will take place at the Royal Academy’s Sainsbury Theatre on 29th January 2019. This will be followed by an interview with Mr Haas.

Stephen Upshaw is a violist and artistic board member of London’s Riot Ensemble. Since making his concerto debut at 17, he has won several competitions and played in festivals around the world such as the BBC Proms, IMS Prussia Cove, Lucerne, Brighton, Huddersfield, Aix-en-Provence, Wien Modern and Oxford Chamber Music.

Manners McDade talks with Stephen about Riot Ensemble and the latest project, Solstices.

Q> How would you describe the role of contemporary classical music in the current musical landscape?

Stephen> Contemporary classical music is brilliantly wide-reaching term which encompasses a great deal of different musical and aesthetic traditions. The age old and very important saying "All music was once new" comes immediately to mind and I think accurately summates the role of contemporary classical in the current musical landscape. We're representing the compositional voices of our time and attempting to blur the lines between long held traditions of elite art music and other forms of music making through collaboration, commissioning and performing.

Q> What is the main drive behind Riot Ensemble and how does that affect your repertoire choices?

Stephen> The Riot Ensemble exists to promote and celebrate the music of our time and to draw attention to the incredibly diverse range of composers across the globe working today. As such, we program our concerts and recordings based on music we love and want to share. Our artistic board consists of our principal players who come from all over the UK, US and Europe and bring with them a vast array of experience, influences and passions. This rich mix of tastes is what we believe makes our programmes particularly vibrant and fascinating for our audiences.

Q> How would you describe the influence of Haas as a composer?

Stephen> We are particularly thrilled to be working so closely with Georg Haas who is widely regarded as one of the most important living composers today. His music and its approach to texture, sensory experience (listening in the dark) and microtonal tuning has influenced a whole generation of composers both through his music being performed all over the world regularly each season and also directly through his position as Professor at Columbia University in New York City. British conductor Sir Simon Rattle has called Haas' piece 'In Vain' one of the great works of the 21st century and cites its use of light and dark in the performance space as a reason for this. Our piece, 'Solstices', continues in this direction but in an even more extreme way, plunging the players and audience into pitch black from the very first note.

Q> What do you get from ‘Solstices’ as a performer and what are the challenges for Riot Ensemble?

Stephen> The preparation for this project has been uniquely challenging and exciting in equal measure and has asked us as players to work in a way that is very different to the standard rehearsal process. Memorising a work of such significant length is a challenge in itself but also negotiating a whole ensemble of players to coordinate in this way creates an extra level of difficulty. When the project first came about, the ensemble and Mr. Haas all knew these were ideas that came with a great deal of risk but based on the rehearsals we have had so far, the risk has absolutely been worth it and the quality of listening that comes out of a dark environment free of stands and pages is incredibly profound for both player and listener. I guarantee it's unlike anything you've experienced before in concert!

Q> What would you say is important in the relationship between a composer and performer/s?

Stephen> Number one, trust. Composers work tirelessly composing new pieces and we as performers need to do everything in our power to bring their vision to life in as much detail as possible. In reverse, people commission composers who they trust will deliver a wonderful piece of music. We try to give as few stipulations to composers that we work with as possible in order to allow them the maximum amount of creative space. The reason we were so excited to work with Haas, for example, was we knew immediately that he would provide a monumental and unforgettable musical experience, which he absolutely has.

Q> And what do you think is important for a successful creative collaboration?

Stephen> Compromise, listening and open-mindedness. Collaboration is one of the great joys for me of being an artist and I learn so much every day from my colleagues in the Riot Ensemble. The most successful collaborations I have been a part of have involved humble spirits who are happy to try things differently. The magic happens in the space between people and in those ideal circumstances, the result is so much greater than the sum of its parts.

To purchase your tickets for the premiere of Solstices January 29th 2019, please see here