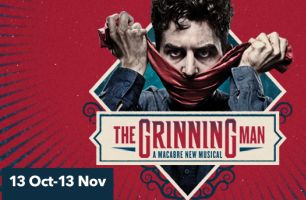 A brand new tragicomic musical directed by Tom Morris (War Horse) and based on Victor Hugo’s novel The Man Who Laughs premieres this week as part of the 250th anniversary celebrations for the Bristol Old Vic.

The Grinning Man is a dark fairy story about a man tormented by the quest to discover how his facial features became disfigured and turned into a “hideous grin”.  The production features extraordinary human and wolf puppet characters, created by Finn Caldwell and Toby Olié. The puppeteers have also worked on War Horse, which has inspired the British theatre scene to rediscover the possibilities of puppetry and theatrical storytelling.

The unforgettable songs and score were created by Tim Phillips and his long time collaborator, Marc Teitler.  Tim recently completed the orchestral score to Dragon, for The National Theatre of Scotland/Vox Motus and Tianjin People’s Art Theatre of China, which will be on world tour throughout 2016.

The Grinning Man plays at The Bristol Old Vic, in King Street, London, from October 13 to November 13, with nightly performances at 7.30pm (Tuesday - Saturday) plus a 2.30pm matinée on Saturdays.