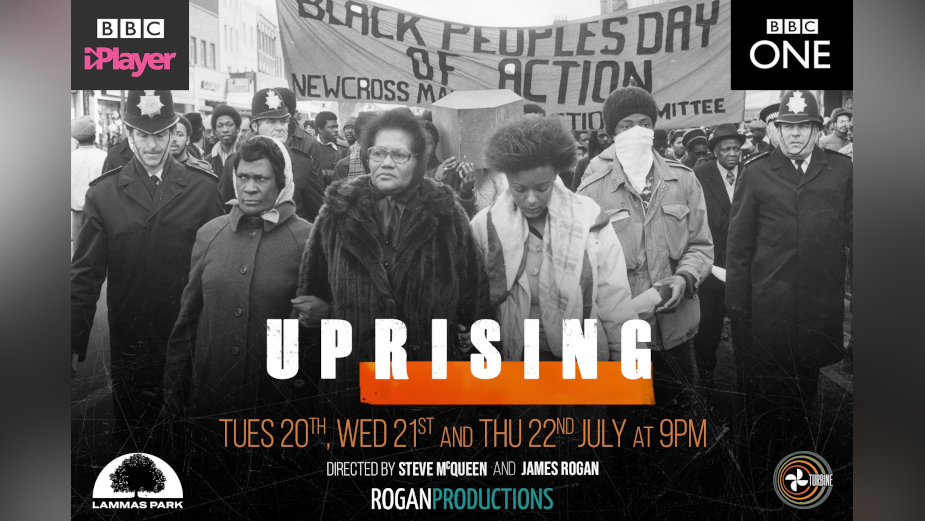 Uprising, a new three-part documentary series directed by Steve McQueen and James Rogan for the BBC, examines three pivotal events in 1981 which redefined race relations in Britain for a generation: the New Cross fire which killed 13 black teenagers attending a birthday party in January of that year; the Black People’s Day of Action in March which was the first mass protest organised by Black British people and the series concludes with the Brixton Riots which took place in April.

Harry Escott worked with Steve McQueen on the film Shane. Talking about this collaboration Harry commented: “My initial conversations with Steve were all about context and the events surrounding and following the fire: The Battle for Lewisham, The Black People’s Day of Action, Operation Swamp, The Brixton Riots - these were not isolated events - there was an inevitability and a logical conclusion to all of this and Steve wanted to connect the dots as much as possible. He talked about it as a river flowing and getting bigger with each twist. That aspect was fun to score, creating something really turbulent that then becomes a positive driving force for change. But, of course, the story starts with the most awful tragedy and when I got into scoring those testimonies I found it incredibly difficult. There was an acute sense of responsibility with this story, which I found odd because I have worked on lots of heavy things over the years, but this felt different; I was frequently in tears on my own in my room…pretty normal job!"

And when asked what he hopes people will take from the series Harry said: "Agitate, educate, organise!” - I think it was Ken Loach that commented on the limited ability for art to deliver on this socialist mantra. We can agitate and educate a little by telling these kinds of stories but ultimately, the crucial “organise” bit is up to others. I hope that many more people in the UK become aware of the New Cross Fire and of the events that followed because of this series. I know Steve wants it to be taught in schools and I have very high hopes for that. The fire itself was, without a doubt, a national tragedy that should have been mourned by the entire nation and it wasn’t. So, firstly, from a human point of view, it should be a conscious part of all of all of our history, our culture, our Britishness. And, then from a historical point of view, the events that followed were major events in British 20th century history that we should all know about. If you are, like me, aware of student protests against tuition fees or extinction rebellion protests or the poll tax riots or the stop the Iraq war protests (the list goes on), watch this series and think about the importance of the fundamental rights that the protestors were fighting for in The Black People’s Day of Action. Why is it that I didn’t know about that demonstration?"

Harry Escott is a BAFTA award winning composer who has provided music for Michael Winterbottom’s A Mighty Heart; Road to Guantanamo, and, most recently, Greed; Clio Barnard’s The Arbor, The Selfish Giant, Dark River and Ali and Ava and as well as Steve McQueen’s Shane. For TV he wrote the music for Roadkill, starring Hugh Laurie, for which he won a BATFA. Away from the screen Harry has collaborated with PJ Harvey on her single An Acre of Land, the poet Lavinia Greenlaw for her sound installation, Audio Obscura and the Ora Singers, who commissioned Harry to write O Light Of Light, a reflection on Tallis’ O Nata Lux.